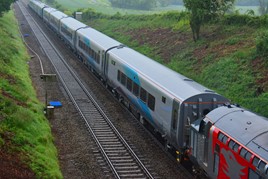 The first CAF-built Mk 5As for TransPennine Express have been delivered to Longsight.

The five coaches will undergo testing and commissioning before entering traffic this autumn. Freightliner Heavy Haul has been contracted to perform the main line testing.


The five coaches form Set 2. They were built by CAF in Northern Spain and delivered to Portbury Dock by ship. From there, Rail Operations Group took them to Longsight, moving north on May 25.

Financed by Beacon Rail, they are the first five of 221 brand new vehicles to be delivered to the UK for TPE by the middle of next year. The 66 Mk 5As will be followed by 12 five-car Class 397 EMUs also built by CAF, and 19 five-car Class 802/2 bi-modes built by Hitachi.

Class 68s hired from Direct Rail Services will operate with the Mk 5As in push-pull mode.

The Mk 5A fleet will run on the Liverpool Lime Street-Manchester Airport-Scarborough/Middlesbrough routes. They will replace three-car Class 185 diesel multiple units that have 180 seats (15 First Class). The new Mk 5A/Class 68 sets have 291 seats (30 First Class).

They will be based at Alstom’s Longsight depot, with additional maintenance at York (at Leeman Road) and a new-build depot in Scarborough. Class 68s are being leased from Direct Rail Services, which will maintain the locomotives. Testing and commissioning will be carried out at the former Manchester International depot opposite Longsight.

CAF is building 66 coaches that will be formed into 13 rakes of five plus a spare Driving Trailer (DT). TPE will operate 12 diagrams per day with one spare set. An additional 70 drivers and conductors have been recruited to operate the new fleet.

On the interiors, TPE Head of New Trains Robin Davis said the specification is for InterCity standards, although there is also an appreciation that commuters and airport users will also use the trains.

TPE Managing Director Leo Goodwin told RAIL last month that should the franchise map change and TPE inherit Liverpool-Nottingham from East Midlands Trains, then the Mk 5As could be employed there (RAIL 851).

Davis also confirmed an option for more coaches if required, and that more ‘68s’ could be sourced. He said it was likely the trains would be extended, rather than more sets being ordered.

Next to the DTS is a TS, which is known as T2. This has 59 seats plus an area for bike and bulk storage (there are a further six tip-up seats, but these are not included in the overall seating figure). A trolley can be stowed here. T2 is fitted with a standard toilet. This coach weights 31.56 tonnes and is 22.2 metres long.

The final coach in the rake is the TF (known as T1). This is 32.67 tonnes and is 22.37 metres long. Like the DTS it is fitted with buffers. It has 30 First Class seats plus two wheelchair spaces. There is also a fully accessible toilet fitted to this coach, as well as catering facilities.

An at-seat refreshment trolley will be on-board with a hot water urn exchange unit in the kitchen area, which reduces the need to load/remove the trolley mid-journey or between trains.

The coaches are fitted with CCTV forward and rear-facing in the saloon and vestibule.

The Mk 5A sets are fitted with couplers on the outermost vehicles with standard draw hook and shackle, buffers and twin air-brake pipes. Inter-vehicle couplings use a semi-permanent rigid bar.

Each coach has two passenger doors per vehicle apart from the Trailer First, which has one. They are all fitted with automatic sliding plug doors with enhanced sensitive edge technology. This remains active for a period of time after door interlock is established, to allow increased detection of objects trapped.


The coaches are fitted with Automatic Selective Door Opening (ASDO) based on GPS positioning. If required, these are supported by track-based beacons.

There are operational door controls in the Driver Trailer and ‘68’ cabs, which the driver controls. There is a minimum of two door control panels (with PA/crew call unit) in every vehicle for use by the conductor.

The coaches’ bogies have an inside-frame and an inboard axle journal bearing design with on-board hot axle box detection.

The stock is fitted with axle-mounted disc braking, air-operated by standard UIC 2-pipe arrangement. There is a spring-applied parking brake.

Wheel Slip Protection (WSP) with sanding is available via the third axle of the DTS coach, while the Class 68s are fitted with sanders.

An automatic passenger count system has been fitted to each coach and this updates after each stop. WiFi is also fitted.

Note: A further two Class 68s will be modified for TPE, but will remain part of the Direct Rail Services fleet.