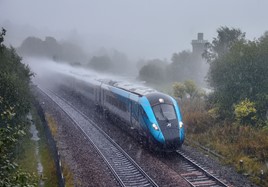 TransPennine Express introduced the second of its three new train fleets on September 28, with a Class 802/2 carrying out its first passenger duties.

The Hitachi five-car bi-mode entered traffic on the 0603 Newcastle-Liverpool Lime Street, and 0925 return.

This follows the soft launch in late August of the Class 68/Mk 5A fleet, which currently has two sets in action each day.