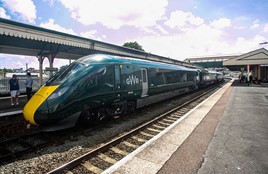 Intercity Express Trains began serving Devon on July 28, when nine-car 800309 arrived at Paignton with the 0818 from London Paddington.

It was the first time a Great Western Railway IET, built by Hitachi, had carried passengers in the county. The trains have been running to Devon and Cornwall on crew training.

GWR Transformation Director Richard Rowland said: “This Intercity Express Train running to Paignton is a key milestone in the delivery of the new fleet across our network.

“From later this summer, our customers in Devon and Cornwall will see more of these new trains when we introduce our Class 802s, which were specifically built to deal with the steep gradients on route to Penzance.”

MP for Torbay Kevin Foster, said: “The arrival of GWR’s new Intercity Express Trains into our bay is a great moment not just for the passengers who will use them, but our region as a whole as these trains speed to the south west for the first time. These sleek new trains will replace the current fleet built in the 1970’s, improving journey times, comfort and reliability.”

Dawlish councillor Rosalind Prowse said: “This is welcome news. I am aware of the importance of railway and without it the economy of the South West would suffer. With the large amount of development in Devon and Cornwall it is necessary to have an updated service carrying us forward into the 21st century.”

“This is testament to GWR's support for the economy and the travelling public of the UK. Fast and efficient travel is key to building our economy and this important development is yet another indication that the South West is very much open for business.”