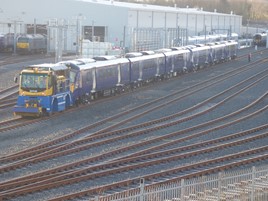 Now, ScotRail is working with the Office of Rail and Road and Hitachi Rail Europe (HRE) to smooth the introduction into passenger service of the first '385' electric multiple units.

Both SR and HRE also told RAIL that three-car 385002 and four-car 385101 will arrive in the UK from mainland Europe in the next few weeks. They have been undergoing tests at Velim (Czech Republic), followed by further tests in Germany, where they were hauled at speeds of up to 100mph.

Class 385s were due to enter traffic initially on the newly electrified Edinburgh-Glasgow via Falkirk Grahamston route from December. That was ruled out by SR, with Siemens Class 380s used instead.

SR spokesman Angus Duncan told RAIL: “We’re building the best railway Scotland has ever had - these new trains mean more seats, faster journeys and better services. We’re excited about their arrival and know our customers will love them too.

"“Two more Class 385s will be delivered to Scotland this week, and the two trains currently on test in Germany will be returning to the UK shortly. We are working with Hitachi and the Office of Rail and Road to ensure that we can introduce the ‘385s’ into traffic as soon as we can.”

They will also be used on newly electrified trains to Stirling, Alloa and Dunblane; on the Shotts line between Edinburgh and Glasgow; as well as on Edinburgh-Glasgow, North Berwick services and Strathclyde routes, including to Newton, Neilston and the Cathcart Circle.