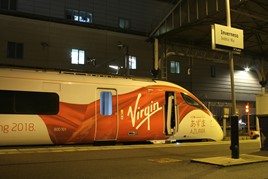 A bi-mode Class 800/1 reached Inverness for the first time on December 15, carrying out a test from Doncaster. This is the first time an Intercity Express Programme (IEP) train has run north of Edinburgh - it ran under diesel power, with overhead line electrification ending west of the Scottish capital.

No exact date has been given, but Virgin Trains East Coast said that the first IEPs will serve five of Scotland’s seven cities from 2019. The first VTEC Class 800/801s enter traffic in December (RAIL 837).