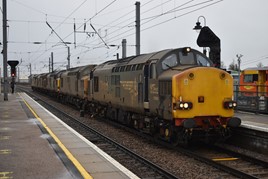 Class 37s are set to remain in traffic with Direct Rail Services for up to five more years, with a core fleet of 13 locomotives to be retained.

The remaining ten examples will be disposed of via competitive tender, in a process that should already have taken place, but which was delayed by COVID-19.

With the first of the 309-strong class reaching their 60th anniversary, the number of main line-registered Class 37s in action has declined in recent years. DRS retains the largest fleet with 23 examples, ten of which are to be disposed of with the rest running (potentially) until 2025.

In an exclusive interview with RAIL, DRS Head of Fleet Management and Stores Andy Grundy explained that this decision is not about nostalgia, but rather that it makes operational sense with the company retaining duties that only the veteran Type 3s can perform.

There is a recognition that the decarbonisation agenda, rising costs to keep them in operation, and the availability of spares will eventually render the locomotives redundant (unless a long-term deal is signed that requires them to continue, or if alternative power trials are required). But in the meantime, they will play an important role at DRS.

Circumstances have changed since 2019, when the company declared it would be disposing of all its Class 20s and ‘37s’, with heritage railways likely to receive them. Since then, life-extension overhauls have been carried out on some of the locomotives.

And while the number of duties on which they are employed has declined in recent times, following the end of contracted passenger work with Northern and Greater Anglia, as well as supplying traction for Network Rail’s Infrastructure Monitoring operations, that doesn’t mean the locomotives have stood idle.

Their main use has been on autumn railhead treatment train (RHTT) duties across northern England and East Anglia, while earlier this year stock movements also formed some of their core work.

However, Grundy explained that there’s more to the decision to retain them: “They have blue-star capability , RA5 route availability, and there’s still things only they can do.”

“We see another five years for them. We have the RHTT contract for the rest of CP6 . Without the ‘37s’, we physically do not have enough locomotives. If we are using all 13 locomotives, then who knows, we may need to resurrect more.”