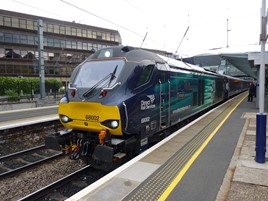 Class 68-hauled passenger trains are due to be withdrawn by ScotRail at the end of May.

Two ‘68s’ and two rakes of air-conditioned Mk 2s have been supplied by Direct Rail Services since Abellio began operating the ScotRail franchise in April 2015. They were due to be displaced once the Inter7City High Speed Train fleet entered traffic, but that project is running two years late.

The other key factor surrounding their withdrawal now is that dispensation for the Mk 2s to remain in traffic despite not meeting accessibility regulations expires at the end of May. Already Riviera Trains Mk 2s supplied by DRS for SR have been returned to their owner.

Currently the ‘68s’ are used on evening trains on the Fife Circle, whereas previously they had been used on early-morning and early-evening peak period trains on the route.

Once ScotRail increases the number of trains it can run following lockdown, diesel multiple units will replace them as sufficient IC7s will have been delivered to facilitate an internal cascade.