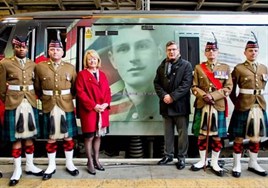 A commemoration of Edinburgh’s own heroes of the First World War – including a professional footballer with Hearts who was killed in action on the Somme – has taken place at Waverley Station today (Tuesday December 16).

The memorial event took place in front of East Coast’s 91111 For The Fallen which sports a livery filled with images, stories and tributes to regiments along the route and the people who served in them during World War One.

The locomotive also carries the insignia of five historic regiments from the East Coast route as well as those of their modern-day successors; including the Royal Scots, today’s Royal Regiment of Scotland.

The 16th Battalion The Royal Scots was raised by Sir George McCrae, a self made businessman and prominent political figure in Edinburgh, who was also a director of Heart of Midlothian Football Club – ‘Hearts’ to football fans in Scotland’s capital city. McCrae realised that if he could get players to join his battalion, supporters would join to serve alongside their sporting heroes.

In a matter of weeks, 1,350 people enlisted, including 30 professional footballers, among them Lance Corporal James Boyd, who was killed in action at the Somme on August 3 1916, aged 21. The last message sent home by Lance Corporal Boyd before he was killed features in the special livery on 91111.