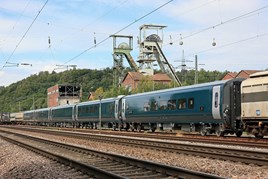 Main line testing of the first Caledonian Sleeper Mk 5s could start in December, with the first rake of 16 carriages entering traffic next April.

Speaking to RAIL, CS Chairman Peter Strachan said that the five vehicles currently on test at Velim (Czech Republic) will move by rail to Polmadie depot, where they will be joined by a further three to complete a ‘unit’. He explained that CS considers each eight vehicles as a ‘unit’ and a full 16-vehicle set of MK 5s as a ‘rake’.

CAF is building 75 Mk 5s in Beasain (northern Spain). The first vehicles left Spain for the Czech Republic in August (RAIL 834). These will be the only coaches delivered to the UK by rail, with the remaining 70 moving by ship from Bilbao to Teesport. This is a CAF logistical decision.

Strachan said that before Christmas, a full rake will be in the UK.