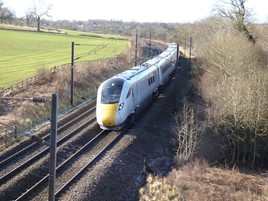 Main line testing of the first Class 801 has begun in the UK, after five-car 801101 ran from Doncaster Carr to Darlington and back late on January 29.

It is the first Hitachi Intercity Express Programme electric multiple unit (EMU) to travel on Network Rail metals, and one of three ‘801s’ in the UK. Fellow five-car 801102 is also at Doncaster, while nine-car 801201 is now at Doncaster Carr, having moved south from Newton Aycliffe last wee. The latter has undergone various tests within the factory, as well as trips on the short test track at the site.

Virgin Trains East Coast (VTEC) plans to introduce the first Azumas into traffic in November (RAIL 845). It is understood they will run to Leeds and York.

A RAIL source suggests that subject to final plans being confirmed by VTEC, one set will enter traffic in December, with a further three sets entering service during January 2019, again serving Yorkshire.

The North East receives its first Azuma trains in February 2019, when a further three trains enter traffic (taking the number to seven).

The first Scottish trains operated by Azumas will begin in March, when a further three sets are in traffic (taking the number to ten).