Cause of Vivarail fire “not immediately obvious” 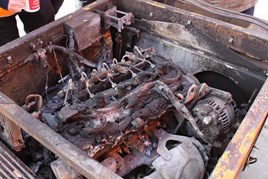 The cause of the fire that damaged Vivarail’s prototype D-Train during main line testing on December 30 2016 is “not immediately obvious”, the company’s interim investigation has concluded.

The investigation was commissioned by Vivarail Chief Executive Adrian Shooter in the immediate aftermath of the incident, which brought the three-car diesel-electric multiple unit to a halt at Kenilworth (RAIL 818).

A blaze started in one of its detachable engine modules (gensets) at approximately 1300. Ten staff from Vivarail and operator West Coast Railway were all safely evacuated, although the stationary Class 230 did cause more than 300 delay minutes to services between Coventry and Nuneaton, until it could be moved at approximately 1700 from the single-line section it was blocking.

The incident was reported to the Rail Accident Investigation Branch (RAIB), but RAIB has since confirmed to RAIL that it will not be conducting its own investigation. A full and final report was therefore due to be completed by Vivarail by January 31 (after this issue of RAIL had gone to press).