GWR shows off the first of its new Class 387 EMUs 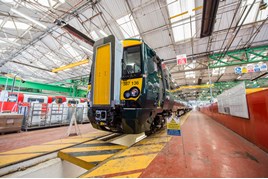 New electric multiple units for Great Western Railway were unveiled on August 12, ahead of their introduction into traffic on September 5.

Bombardier has built the first eight of 45 EMUs for GWR - Class 387/1s that will be used on Thames Valley routes. Initially they will be used between Hayes & Harlington and London Paddington.

GWR spokesman James Davis told RAIL that further rollout of the trains depended upon Network Rail’s electrification programme. He said that “GWR expects to be using these trains across its electrified Thames Valley network by autumn 2017”.

The first eight trains to be delivered (387130-387137) were ordered when First was awarded the franchise in March 2015 (RAIL 770). The 37 additional EMUs were ordered this year, replacing the planned cascade of 29 four-car Class 387/1s from Govia Thameslink Railway. The additional order contains 23 new EMUs and 14 that had been ordered speculatively by Porterbrook.

Davis said that the full rollout of the remaining 37 trains “depends on Network Rail electrifying the Thames Valley”.

Also dependent upon NR is the use of ‘387s’ at 110mph. They have been built to operate at this speed, but Davis explained that it was too early to state when this would begin because timetables have yet to be agreed with the infrastructure company, and it depended upon the completion of the electrification work.