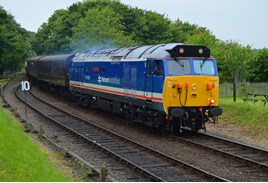 A Class 50 has become the first of its class to haul a passenger train at the North Norfolk Railway.

The NNR’s diesel gala on June 9-12 celebrated the 30th anniversary of Network SouthEast, and 50026 Indomitable was one of the stars.

The Type 4 made the NNR passenger debut for the class on June 8 (ahead of the official three-day gala), during a special preview evening that involved four round trips hauled by the locomotive.