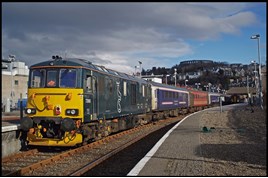 The rebuilt locomotives’ debut came on February 13, when 73967 hauled the 2018 London Euston-Aberdeen/Inverness/Oban forward from Edinburgh Waverley, leaving the Scottish capital as the 0450 to Oban. Engineering works had forced the diversion from Fort William, to where the Sleeper usually runs.

On the rear was 73968, which was hauled dead in train to Oban, and which took the empty coaching stock to Polmadie.

The rebuilt ‘73s’ have been undergoing testing and commissioning in Scotland ahead of their entry into passenger traffic. Six are on order, with three so far delivered. They were needed for the Oban trains because of their Route Availability of 5 - this meant that unlike the Class 67s that had been hauling CS trains, they could run to the West Highland town.