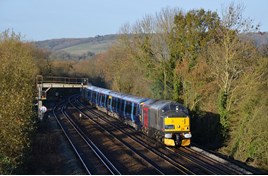 Rail Operations Group (ROG) has become the first UK train operator to modify locomotives for the routine movement of electric multiple units. The company has modified 37884 as it looks to expand its presence in the rail services market.

“Having gained huge support from the industry, we invested in our ambition and launched a project in June to acquire and modify a small fleet of Class 37 locomotives. Just five months later, the first one has entered EMU haulage service,” said ROG Operations Director Dave Burley.