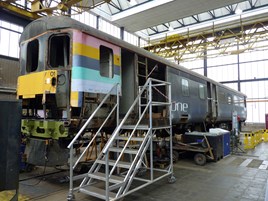 Bought from DCRail, the Mk 2f Driving Brake Standard Open (DBSO) is destined for use on the Cumbrian Coast Class 37-hauled trains operated by Northern Rail.

It will be painted in Northern livery when it is released, and will follow 9705/707, which have already been refurbished but have yet to enter traffic.

After 9710 is released, two more DRS DBSOs will be released, each eight weeks apart. RICHARD CLINNICK.