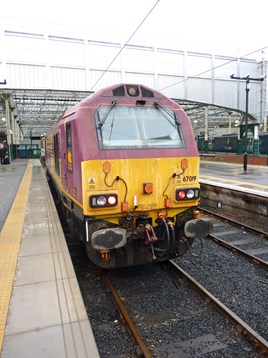 GB Railfreight will use Class 67s hired from DB Schenker for the Caledonian Sleeper franchise.

The ‘67s’ will be used until enough rebuilt Class 73/9s are available. This is expected to be October. GBRf plans to use six Class 73s to haul CS trains between Edinburgh and Aberdeen, Fort William and Inverness.

This means that Class 47s hired from Harry Needle Railroad Company will now not be used.

In a statement DB told RAIL: “After receiving a request to support the mobilisation and handover of the new franchise from GB Railfreight, we have agreed to provide four Class 67 locomotives on an interim basis for the haulage of the Caledonian Sleeper services. This will begin on April 1.”

Serco will operate the CS franchise, taking over from ScotRail when the franchises were split.