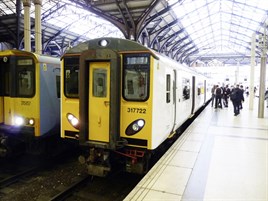 The four-car EMU is fitted with new traction packages, while two vehicles have been internally refurbished for passenger evaluation.

The EMU performed a VIP trip from London Liverpool Street to Bishops Stortford on June 10, and entered traffic later that week. It will be used on West Anglia routes between London and Cambridge, and initially on the Bishops Stortford to Stratford route.

The ‘317’ forms part of a £7 million project involving AGA, Bombardier and Angel Trains. Bombardier overhauled and refurbished the EMU, and fitted it with a traction package that should see it perform similarly to an Electrostar. AT owns the ‘317’.

Should the demonstrator unit be successful, then it will provide the industry with an EMU built in 1981-1982 but with the capability of a new train.

Internally there is increased space in the vestibule area and new seating, while passenger information screens and brighter LED lighting has been installed.

Performance-wise, new AC traction motors allow the EMU to accelerate faster. It is also the first of its class fitted with regenerative braking, and can put up to 36kW energy back into the system when braking. Overall the ‘317’ should use up to 40% less power than an unrefurbished example.

For seating, it is reconfigured in two vehicles with 2+2 arrangement to maximise the space available for passengers on shorter metro duties. On longer journeys it could be reconfigured with arm rests and seat back tables, or fitted with a 3+2 interior.

AGA is welcoming feedback from passengers on the EMU, using www.abelliogreateranglia.co.uk/class317feedback or by emailing [email protected]

This is the second demonstrator EMU in traffic with AGA, after Eversholt Rail’s 321448 entered service in December 2013. That has new interiors, but no new traction package yet.