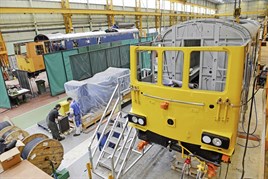 The first of GB Railfreight’s rebuilt Class 73s was due to begin testing at the Great Central Railway in Loughborough as this issue of RAIL went to press.

73962 is one of five classmates (now-numbered 73961-73965) that have been undergoing rebuilds at Wabtec’s Brush Traction facility, also in Loughborough.

“Two should be introduced by the RHTT season , and the others will follow by the end of the year,” GBRf Managing Director John Smith told RAIL. He said that as with building a new locomotive, “there have been issues”, but that these should all now be resolved.

The ‘73/9s’ are mainly intended for work such as infrastructure monitoring and RHTT, for which GBRf has a contract beginning later in the year. These first five are for that contract. However, Smith added: “If you stick two together, they can do what a ‘66’ can do”, suggesting that the rebuilt ‘73s’ may well take on more tasks in the future.

Smith also confirmed that GBRf has already ordered more power units to convert other ‘73s’ in the fleet. “We’re looking at follow-on orders. Because these things will be a success,” he said.

The rebuild project is intended to give the locomotives a further 25 years in service. Smith said GBRf had “always only spent money on them to get them to the end of the contract”, but with Network Rail contracting the operator to do more work, it was decided to rebuild them.

He continued: “We could have bought a new locomotive. But actually the mechanics of using the same underframe, which has ‘grandfather’ rights, compared with building completely new locomotives with that type of engine in, would probably have cost more than a ‘66’.”

To mark its completion, 73962 was named Dick Mabbutt at a naming ceremony at the Brush Open Day on August 3, marking the facility’s 125th anniversary. The locomotive itself is 48 years old, having been delivered in May 1966.

The ‘73s’ were the first hybrid locomotives. Rebuilt ‘73/9s’ can provide the same power output from either diesel or electric, meaning they have the ability to work off the third rail for most of a journey and diesel over the last section, making them very versatile.