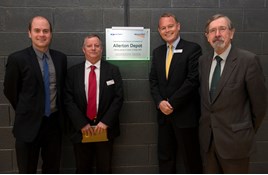 The depot, located near to Liverpool South Parkway, was acquired by Network Rail in 2011. Formerly operated by Thameslink, the Class 319s are due to be fully deployed by December 2015, and are intended to provide an additional 6.7 million seats a year on routes between Liverpool, Manchester, Wigan, Preston and Warrington.

Martin Frobisher, route managing director for Network Rail, said: “The electrification of Allerton depot is an important part of our railway upgrade plan, with Network Rail investing over £1 billion to improve rail services across the north.”

Northern Rail Managing Director Alex Hynes said: “Network Rail’s support through the improvement and extension of Allerton depot is vital. It means that we are not only equipped to maintain the electric trains we already have in service, but we are able to introduce even more in the coming months.”

Work on the depot started in 2014, and the improvements have been delivered in three phases, with phases 1 and 2 now complete. These include: electrification and extension of the existing train shed to accommodate the longer electrified trains; installation of new electrification equipment; a new depot protection system to safeguard staff; modernisation and expansion of the existing maintenance pit to improve access; new walkways and lighting; new sanding equipment; and the installation of new and re-conditioned track.