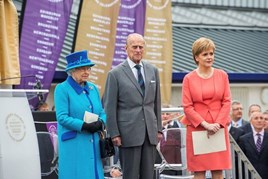 Her Majesty The Queen officially re-opens the 30.5-mile Borders Railway today, the day she becomes the longest reigning monarch in UK history.

The Queen will travel aboard a steam-hauled ScotRail train to Tweedbank with Scottish First Minister Nicola Sturgeon, three days after passenger trains returned to the Borders region (and 46 years after the railway closed in January 1969).

Passengers first travelled on the £296 million line on September 6, when the 0845 Tweedbank-Edinburgh Waverley departed formed of three two-car ScotRail Class 158s. ScotRail said that on the first day, more than 2,500 journeys were made on the newly opened line.

The project was completed on time and on budget, and it is expected that 650,000 passengers will travel on the line each year.

At its peak there were 1,100 people working on the project, with 137 bridges refurbished or built, and 1,000 rails laid across almost 100,000 sleepers. Seven stations have opened at Shawfair, Eskbank, Newtongrange, Gorebridge, Stow, Galashiels and Tweedbank.

“Many people have waited a very long time to hear those words, and I am proud and excited to be able to say them.

“Scotland’s railways are enjoying a period of success not seen since the time that the old Waverley line was built in the Victorian era - largely thanks to the Scottish Government’s record levels of investment, but also because the people of Scotland see the benefits of rail.

“The Borders Railway will be a real catalyst for growth in the Scottish Borders and Midlothian. It will open up new opportunities for work, leisure, study, and investment and business for these areas, which will (in turn) benefit the wider Scottish economy.”

Campaigners and councillors join forces to back Borders plans

New report by the Campaign for Borders Rail (CBR) makes the case for re-opening the line from Tweedbank to Mossband Junction.