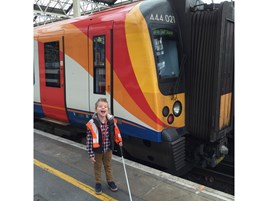 A seven-year-old boy from Kent was given the chance to drive a train by the South West Trains-Network Rail Alliance on September 4.

Malachi Tyler from Tunbridge Wells, and his father Graham, were given a tour of the Control Room at Waterloo. They then travelled to Basingstoke, where he joined the station team to make some announcements before heading to the Rail Operations Centre.

Malachi, who has a genetic condition called neurofibromatosis, and is blind, has two brain tumours and epilepsy, also used the train simulator at the ROC before returning to Waterloo first class.

Sixty-eight years after he started working at London Waterloo station, the man thought to be Britain’s longest-serving railway worker has retired.