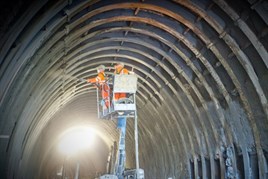 Age catches up with all of us, the railway included. Inevitably, across the country, parts of the network start to show signs of wear and tear because of the ravages of time.

One such 160-year-old had become severely distorted because of land movements. Strengthening work in the 1980s and 1990s, using steel ribs, had merely staved off the inevitable, and distortion and deterioration had continued to set in.

A long-standing 20mph speed restriction had been imposed through the 250-metre Holme Tunnel, on the East Lancashire line between Burnley Manchester Road and Todmorden. But a major reconstruction programme by AMCO and Network Rail has secured the tunnel’s future, and in the process it won Civil Engineering Achievement of the Year at RAIL’s 2014 National Rail Awards.

Dating back to 1849, Holme Tunnel was designed by John Hawkshaw, an engineer for the Lancashire and Yorkshire Railway. It was dug by hundreds of navvies, blasting and shovelling through 242 metres of sandstones, mudstones and five coal seams. And all of it under an unstable hill called Thievely Scout.

It was an important route for oil tanker trains, but when they stopped using the Copy Pit line in 1982, closure of the route looked likely. But it was saved by commuter trains sponsored by the Burnley and Bradford Permanent Building Societies in 1984, and now enables Northern Rail to offer 40-minute journeys from Burnley to Manchester Victoria.

However, the tunnel had been deteriorating for the past 40 years, because of the movement in the surrounding ground. This was most keenly seen at the Todmorden Portal, where the haunches had moved inwards by up to 320mm and the crown upwards by 180mm. The 20mph speed restriction could not continue indefinitely, and the deterioration would only continue.

NR engaged AMCO to develop a solution to the problem, setting out the following aims:

It was agreed that the most efficient way (and least disruptive in the long term) was to use a total blockade of the route. And so a 20-week blockade was planned for between November 2013 and March 2014.

But before the blockade could begin, extensive preparatory work was required. The main part of this began in May 2013, to stabilise the ground surrounding the tunnel. AMCO drilled through the existing tunnel lining in order to inject 650,000 litres of cementitious grout into the ground. Injected at high pressure, this strengthened and stabilised the ground and surrounding rock, so that the old tunnel lining could be removed during the main blockade works.

With the blockade in place, the work began in earnest. The old tunnel lining was broken out in 1.5m sections, using a technique borrowed from the mining industry known as a ‘back rip’. This minimised the amount of ground exposed at any given time, and significantly reduced the likelihood and severity of any falling rock. To further improve safety, a temporary protection mesh was put in place.