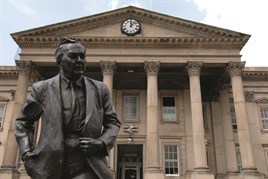 They’re a proud people in Yorkshire, and there’s ‘nowt’ that Huddersfield is more proud of than its railway station.

In September, Huddersfield, which has been managed by First TransPennine Express since 2004, was triumphant at RAIL’s National Rail Awards, winning in the Large Station of the Year category for the quality of the station environment for passengers.

NRA judges said Huddersfield has been given an “inspired renovation which has respected its heritage, while creating a brighter and more modern station environment”.
The work has seen the Grade 1-listed station buildings (putting its architecture into the same category as London St Pancras) lovingly cleaned and restored, including the dramatic portico façade.

Inside, the spacious ticket hall has been transformed into a light and welcoming area by the provision of a white marble floor and lots of daylight, complemented by a smart ticket office and a bright shopping area.

This is all the result of an extensive £1.4 million makeover in the past year. The developments have succeeded in not only modernising the station, but also preserving the heritage features of the building.

It was commissioned by the Ramsden family trustees (who also laid out fine new streets in Huddersfield in the 19th century, including St George’s Square in front of the station), and designed by J P Prichett. While the portico at the front of the station is not as high as that of the Euston arch demolished in the 1960s, its 416ft width probably makes it more imposing as a result.

Built between 1846 and 1850, the station was almost ‘too grand’ for what was, in the mid 19th century, a town of only 30,000 people. The station building is, in fact, the physical result of a dispute between the Huddersfield and Manchester Railway & Canal Company and the Manchester & Leeds Railway.
Architectural historians may note that the platforms are covered by a double-span London and North Western Railway train shed. This replaced a previous single-span roof that existed prior to 1886.

No ticket gates are installed at the station, adding to the friendly ‘feel’. Instead, TPE staff check tickets at a simple cordon that can be operational at certain times of the day.

However, TPE has applied to bring in automatic ticket barriers at the station, to cut down on fare evasion. The plan is to install the seven gates inside the revamped main entrance concourse - TPE says that the design of the potential new barrier gates will be sympathetic to the building design, and protect the station’s listed status.

Outside the ticket hall, the platform area is equally well maintained, with clean glass, tasteful painting and flowers. The platforms are well equipped, with train information, waiting rooms and catering, as well as two real ale pubs.

On their visit, NRA judges found that “the whole station was spotlessly clean, and there were plenty of staff around volunteering assistance to passengers”.
All in all, the station provides a worthy gateway to a famous town. Appropriately, the first thing that greets you at the front of the station is a statue of the late Labour Prime Minister Harold Wilson (born in the town in 1915).

TPE has ensured that Huddersfield station is accessible to all, with a lift providing access to all platforms (linked by a subway) for those with heavy luggage or who are less mobile. A ramp outside the station provides access from the street for wheelchairs and pushchairs.

The station waiting area has also recently been remodelled, with new, additional toilet facilities on Platform 1.

The station benefits from a variety of amenities, including a cafe, shop, public house and coffee stand managed and run by tenants from within the local community.

Local artists have brightened up the station, with 12 modern artworks on display in the booking hall. With 15,000 passengers passing through the station every day, this gives local artists a great opportunity to have their work seen by a huge audience.

Catering and light refreshment is not forgotten, with the two real ale pubs - The Head of Steam and The King’s Head - proving a popular attraction.

During its visit, RAIL called into the Head of Steam (it’s a tough job, but someone has to do it) and plumped for a local brew, Copper Dragon Golden Pippin at a not unreasonable £2.79 a pint. There’s even a beer called the Northern Pacer, no doubt inspired by the 1980s DMUs that trundle in and out of the station.

The Head of Steam feels reassuringly old-fashioned, in an age when it seems as if such pubs have completely disappeared from the railway (just as they are fast disappearing everywhere else). Local railway memorabilia adorns the walls, in a proud nod to Huddersfield’s railway heritage.

A further draw for enthusiasts is the Mk 1 carriage tucked away at the side of Platform 2 - a one-time base for the Association of Community Rail Partnerships, which has now moved into a ‘new’ building. The carriage is to become the headquarters for a charity aimed at helping teenagers, saving it from scrap.

The Head of Steam also serves a wide variety of hot meals, which are served in the restaurant area of the pub with specials on different nights of the week. For those in more of a hurry, the Pumpkin café bar is available on the island platform offering the usual fare of sandwiches, cake, tea and coffee.

Despite being a large station (there are eight platforms, although it doesn’t look like it at first glance), Huddersfield has a homely, friendly feel.

Services are provided by Northern Rail and TransPennine Express. The latter operates inter-city or regional services on three main routes, while Northern Rail services focus on the local stopping services towards Leeds, Manchester and Sheffield.

Boasting such splendid architecture, a high standard of cleaning and maintenance, a commitment to detail, and a variety of catering and retail outlets for the short or long-distance traveller, Huddersfield is a worthy National Rail Awards winner.