A station fit for a King 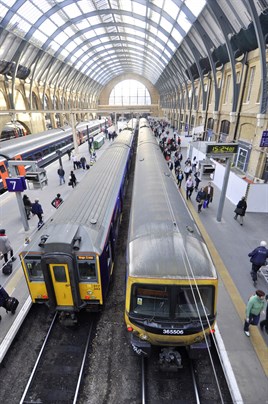 Every year 47 million people pass through London’s King’s Cross station, with this figure predicted to rise by a further 10 million over the next decade.

To put those figures into context, Heathrow Airport serves about 65 million passengers per year, but with five terminals each many times the size of King’s Cross.

That equates to an intense concentration of travellers passing through King‘s Cross every day, especially during peak hours. And those passengers demand a station fit for 21st century demands.

Over the years it became clear that the existing station was dysfunctional. Not only did it fail to meet modern needs, it was also in poor condition. A dramatic improvement was needed to cope with the future demands of more than 50 million passengers.

Plans for the station’s redevelopment began in 1997, but it wasn’t until London won the Olympic bid in 2005 that momentum really started to pick up on the £550 million project. Network Rail was given the opportunity to completely transform King’s Cross into the best of modern design and engineering, worthy of rivalling its Gothic neighbour St Pancras (completed in 2007 after an £800m restoration).

Restoring Lewis Cubitt’s 160-year-old Grade 1-listed King’s Cross was fraught with complications - not only because of the requirements of English Heritage, but also because of the need to provide something modern and groundbreaking.

NR (at the time Railtrack) was determined to embrace the best that design had to offer, and so initiated a design competition that eventually led the company in 1997 to architect John McAslan + Partners, which describes the project as a combination of re-use, restoration and new build.

The train shed, Western Range and Eastern Range buildings were re-used, Cubitt’s Victorian façade that has been partially obscured for 150 years is being carefully restored, and the western concourse is an entirely new build.

The redevelopment has been a complex project, comprising a number of individual elements (in many cases running simultaneously) that together form the overall scheme. The eight ‘packages’ (see panel, left) each have an individual project director who reports to overall programme director Ian Fry.

The Eastern Range building, alongside York Way, was the first key element. Building work began in 2007, and needed to be completed early on in the redevelopment so that the station’s operational staff could be moved there from the Western Range, thus ensuring the station remained operational throughout the entire redevelopment process.

The Eastern Range is part of the original Victorian structure, and comprises three floors built over the historic cab road (now the site of Platform 0). The top floor had not been used for many years.

NR contracted Costain to sympathetically restore the building while also providing modern requirements. It was imperative that the work was completed on time, so that it did not hold up redevelopment of the Western Range.

Wherever possible, the original design was reinstated - this included replicating salvaged bricks, and analysing the original mortar mixes to ensure the building retained its 19th century charm. But in keeping with the rest of the redevelopment work, the modern enhancements are truly modern - wrought iron girders suspended above glazed lifts and a steel and glass mezzanine bridge juxtapose beautifully with the original brickwork of the building.

The refurbishment was completed in January 2009 (ahead of schedule), and reinstated 70,000 square feet of much-needed commercial office space to the area.

If you’re a regular user of King’s Cross, you might ask yourself if you’ve evaer noticed a delivery at the station. No? Here’s why.

While the Eastern Range was being refurbished, work began at the same time on the new shared service yard. This is subterranean (adjacent to Platforms 9, 10 and 11), and provides an ingenious solution to delivering and removing goods.

A ramp from Goods Way leads down into the yard, which is then connected to a maze of tunnels under the station. Lifts are positioned along these tunnels to allow deliveries to be transported directly to the platforms from the yard, keeping goods delivery and waste collection out of sight of the public.

NR and Argent (the company appointed to develop the land around King’s Cross) realised that both would benefit from the shared service yard, so the companies shared construction costs equally. They are also sharing the lease for its management.

Argent is also building a nine-storey office block above the yard, into which Google will be moving its European headquarters.

One aspect of the redevelopment that many commuters might miss entirely is the extensive work carried out on the main train shed roof.

On some parts, decades worth of lead-based paint had to be stripped, to expose the original framework for restoration, while 1,392 new solar PV cells cover more than 2,300 square metres. The 240kW system is expected to produce 175,000kWh of electricity - enough to provide about 10% of the station’s power, and potentially save 100 tonnes of CO2 every year.

The solar cells have been embedded into glass laminate units strong enough to withstand a bomb blast.

Another crucial part of the redevelopment sequence was the creation of Platform 0, under the Eastern Range. This site was once the cab road, where the grand passengers of the day would alight their train on the east side of the station straight onto their waiting horse and carriage.

Without question the most visually stunning part of the redevelopment is the spacious and ambitious western concourse (with a potential passenger capacity of about 12,000).

Officially opened to the public by London Mayor Boris Johnson on March 19 2012 (RAIL 692), what makes the western concourse such a complete and comfortable fit is that it is almost perfectly semi-circular, taking its radius from the Grade 2-listed Great Northern Hotel on the southwestern edge of the site.

This not only allows the two buildings to dovetail neatly together, it also creates a pleasing connection with the history of the area. The curvature of the hotel reflects the route of the old St Pancras Road that once ran adjacent to it, and that same curvature now forms the basis of the entire western concourse.

The truly iconic image of the western concourse is its curving roof, measuring 52 metres from centre to circumference. This enormous unsupported span was necessary because the new Underground ticket hall is located directly underneath the concourse, making foundations impossible.

The benefit of this restriction is that it allows the space within the concourse (approximately the area of three Olympic-sized swimming pools) to be open and free of supporting columns. Passengers can move around the station more easily, and have an unobstructed view of the departure boards.

White steel in a diagrid canopy cascades down into an arrangement of 16 ‘tree’ columns and a central ‘funnel’ column that support the unusual arrangement of beams.

The majority of the curved roof is then covered with 1,200 solid triangular panels, while 1,012 glazed panels allow natural light into the building, creating a bright and airy atmosphere almost completely at odds with the original dark and dingy concourse.

Impressively, the structure is not supported by the Western Range building, neatly separating the historic station from the modern addition.

The west side of the concourse is where the majority of the station’s 25,000 square feet of shopping facilities are located, with mainly clothing, jewellery and gift stores on the ground floor, and restaurants (including an extensive seating area) on the upper floor.

Located directly behind the ‘funnel’ of the roof structure is the focal point of the Western Range development work - the booking hall.

Tickets had not been sold from the magnificent 1852 ‘pay office’ since the southern concourse opened in 1973. Restoration of the building, including the use of one million bricks to reconstruct the western façade, means that tickets are now once again being sold there.

This façade was destroyed by a bomb during the Second World War, and previously the funding to repair the damage just did not exist. The ‘bomb gap’ (as it came to be known)houses a ventilation shaft for the London Underground station beneath.

The Western Range building also houses many of the station’s shops and a new pub, The Parcel Yard, at the north end of the building.

The final stage of the project, due to be completed in the autumn, will see the area once dominated by the southern concourse (built in 1973) transformed into a 7,000 square metre public square - that’s big enough to lay Big Ben on its side. The original planning permission for this ‘temporary’ structure had been five years, renewable annually, but a lack of funding meant it became rather more permanent.

Despite being such an eyesore, its connection with the 1852 Grade 1-listed building meant that the southern concourse was also Grade 1 listed (as are any new additions to the station, including the western concourse).

Given its unpopular status, obtaining permission from English Heritage to demolish it was not difficult. What complicated matters was that the roof of the Underground ticket hall is only 300mm (one foot) underneath!

Before demolition began, NR decided on a rigorous salvage strategy to reuse as much of the building as possible, and to find new users for as many of the old fixtures and fittings as possible, including the famous Handyside bridge (see panel).

Finally, all but two sections of the ugly polycarbonate-roofed ‘green shed’ have been demolished, revealing in full Cubitt’s double-arched Victorian façade for the first time in more than 150 years.

Network Rail is delighted with the condition of the façade, because until the southern concourse had been demolished it wasn’t clear what the state of the brickwork would be.

An important part of the façade’s restoration is retaining enough of its condition to tell the story of its past. Superficial, non-structural damage is being retained, with NR cleaning the brickwork rather than replacing large sections of it.

There will be an addition to the façade - a canopy to protect users of the station from the weather, although this will be of modern design to clearly define its place in the
history of the station.

Removing the southern concourse will make way for a bright open space 50% bigger than Leicester Square. And to augment the eye-catching design of the western concourse, NR introduced a further design competition for the public square, finally appointing Stanton Williams (winner of the Stirling Prize 2012).

The design will replicate the feeling of rail tracks, in a two-tone black and light gray combination of Yorkstone and granite paving. Outdoor seating and japonica trees will also feature on the square, with the number of trees to be increased after public consultation.

Network Rail has taken the tired, disfigured station that King’s Cross had become, and restored it to its former Victorian beauty, while creating a truly modern twist.

Transforming a station whose surroundings once had a reputation for prostitution and drugs, into a destination station that is a catalyst for one of the largest regeneration schemes in Europe, is a truly extraordinary achievement of which Cubitt himself would have been proud.