Edinburgh: the end is nigh! 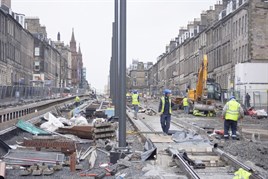 The troubled Edinburgh trams project is on the home straight at last, passing a significant milestone with the official handover to Edinburgh City Council of a 2.8km section of track between Gogarburn depot and Edinburgh Airport.

After much publicised difficulties with Transport Initiatives Edinburgh (TIE, the company originally responsible for delivering the project), the council is now responsible for managing the construction of the line. It will also operate the line via the municipally owned Lothian Buses Company, returning a form of tramway to the streets of Edinburgh for the first time since November 1956.

Normal services for passengers are set to start running by summer 2014. There will be 16 tram stops along the 14km (8.5 miles) route, providing passengers with fast and efficient connections between some of the city centre’s most populated residential and commercial areas.

It will take 25 minutes for trams to reach the city centre from the airport, cutting 20 minutes off the current peak-time bus journey.

Following considerable delays in construction and the drastic scaling back of the project, there is some disappointment that, for the time being, the route will not be extended along Leith Walk. However, both civic and national politicians are now looking forward to the completion of one full route (albeit scaled back from original intentions, which would have seen the route extended to Newhaven).

The most obvious sign of an imminent completion to the project is the tram testing and driver training that has started between the depot at Gogar and Edinburgh Airport - an official handover from contractors Bilfinger Berger and Siemens to the council took place in March.

City Council Transport Convenor Lesley Hinds tells RAIL: “The coming months will see on-street works completed, full-line tram testing, and driver training along the whole route. It’s a big year for the project, and we can push on safe in the knowledge that this first 2.8km section has been successfully completed and is working well.”

But Hinds responds: “We’re determined to limit this as much as possible. Our team will stay in close contact with residents and businesses so they have the information they need to limit the impact of the remaining works.”

The council has stated that the official completion date is summer 2014. However, Hinds suggests that consideration is being given to a “shadow running phase”, with invitations sent to community groups to act as ‘guinea pigs’ for the route. That was the role offered to Scottish politicians and members of the media at a special invitation day on March 8 - the VIP trip was also the first for passengers outside the depot, which has hosted tram rides for invited guests for more than a year.

Hinds maintains that construction work is “currently three to four months ahead of schedule” and is “reasonably confident” that trams will be running in public service ahead of summer 2014, despite the outstanding Office of Rail Regulation commissioning and testing requirements.

With all contracted works set to be finished by the end of this year, a firmer timescale is expected to be released in September, when the tram project team will report to the council.

Up to six months of tram testing is then expected over street sections of the route
east of Haymarket.

Renewed confidence in the tram project has been such that community groups such as churches, Scout and Girl Guide groups, as well as representatives from local businesses, were offered their first chance to ride the tram in April - albeit only between Gogar and the airport, the only currently energised section.

That confidence cannot have gone unnoticed by Scottish Finance Secretary John Swinney, who (like his Scottish National Party cabinet colleague Keith Brown) attempted to scrap the scheme when the SNP came to power in 2007.

Swinney’s 81-year old father Ken, a member of Corstorphine Community Council and whose own father worked on the previous incarnation of Edinburgh trams, is among those who have requested a trip on the test section.

And despite the problems of construction work disrupting local businesses, Ken Swinney says he is “disappointed” that the tram line isn’t yet being extended down Leith Walk.

“In the old days, trams served the whole city. I would like to see that again, but it would cost a lot of money,” he told The Scotsman.

As Edinburgh has found to its great cost, modern light rail is a lot more expensive and complicated than the more straightforward systems installed by the city’s Victorian and Edwardian forebears, which relied mainly on rigid double-deck tramcars.

Any rushing of the project could heighten sensitivity over cost, although the council says it “remains in line with the revised budget of £776 million” that was approved in September 2011.

Sounding a more cautious note on the finances and timescales, he is keen to ensure “a focus on delivery”, adding: “One of the lessons is not to over-promise and under-deliver. Around £1 billion has been spent on the project over the past five years, including £72m of Scottish Government money injected in 2011, when the project hit crisis point after disputes between contractors and TIE.”

On the other side of the fence, the project is attracting plaudits from those who might be expected to support trams anyway. Campaign group TramForward has applauded the “strategic decisions taken by Edinburgh City Council to ensure the success of the new tramway and future growth”.

Ticketing systems are currently being worked on - integrated bus and tram ticketing is to be introduced, a move that TramForward describes as showing “foresight”. The idea is that Edinburgh’s public transport network will begin to resemble that of Transport for London - in this case accountable politically to Edinburgh City Council, just as TfL is accountable to the Mayor of London.

Another supporting factor in the introduction of the trams is the arrangement whereby Edinburgh City Council bus operator Lothian Buses will run the trams.

Lothian Buses has its roots in Edinburgh Corporation Transport, established from the corporation tramways department, which dated from 1919.

The bus operator is one of only 11 in the UK still owned by a local authority, following deregulation and the privatisation of the bus industry in the 1980s. The expansion of public ownership appears unfashionable in an industry mostly dominated by the private sector, but tram supporters expect a successful public transport operator using its experience to ensure integrated route planning, and to meet the council’s desire to limit congestion, enhance mobility and improve air quality.

Out on the western reaches of the route, TramForward also wants to expand the Ingliston Park & Ride site. It claims the move would be sensible, given that motorists commuting into Edinburgh could use the tram to travel more swiftly into the city centre.

Hinds is convinced that the trams will win over motoring commuters and bus users alike, particularly those who have been cynical about the tram project.

“They are smooth, quick and roomy, and will be more attractive to people who would not go on buses,” she says.

However, Brown remains more pessimistic - if not wholly opposed - about any extension of the network. “I do not think there is an appetite to have an expanded tram network,” he says. “I’m not hearing anyone saying to me: ‘Can we have more trams in Edinburgh?’”

The Scottish Parliament has already granted extensions between Roseburn, Granton and Newhaven, although it seems unlikely that work would begin just yet. The council would also be forced to ‘go it alone’ if it wants to build new lines, financing the work itself.

Instead, Brown’s emphasis is on moving on from the political and financial debacle that shaped the project for so long. “Now it is here, the most important thing is getting the trams running,” he says.

In the meantime, as special runs for guests continue on the completed section, there’s still plenty to do on the remainder of the route.

Mitigating the effect on local business is particularly important for a project of this size. For example, between Murrayfield and Princes Street, local businesses have been supported by new signage added to the site fencing, helping people find their way to the local shops, businesses and landmarks. Information maps include business directories, walking routes and crossing points.

From May 5, grinding began on tram tracks between Haymarket and Picardy Place, to clean and prepare them for use, with work on Princes Street starting a few days later. Specialist grinding machines have been used for this work, with a small truck running behind indicating that the traffic lane ahead is closed. Both the inbound and outbound tracks have been included in the grinding programme, with the full exercise due to be completed in about nine days.

At Haymarket station itself, work has recently been carried out on the platform edges at the tram stop. And at the other end of Princes Street, between St Andrew Square and York Place, signage similar to that installed at Shandwick Place has been added to the site.

While the airport end of the route is complete, a covered walkway is to be extended from the tram stop to the terminal building, to allow for space for future expansion to the tram stop. It is anticipated that a tram will always be waiting on the platform at this terminus, so that passengers will never be expected to wait outside.

With some of the more peripheral work also now taking place, such as the installation of waiting shelters, the end is in sight for one of the most controversial public infrastructure projects of recent times.

The system had originally been due to open in early 2011. But the new projected summer 2014 opening date (the end of a scaled back, considerably revised and much more expensive project) does at least represent a prize worth having for the travelling public in Edinburgh.

More than five million passengers will have used Edinburgh’s tram network in 2015,