The secret of Serco's success 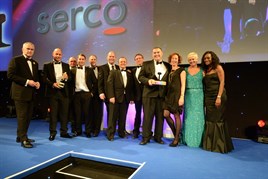 In January 2013 Serco was awarded an 18-month contract extension to operate the Docklands Light Railway, one of the most reliable train services in the UK.

This extension (to September 2014) to the original seven-year franchise rewarded a remarkable performance in 2012, a performance that was also a principal reason for National Rail Awards judges awarding Serco Docklands the City & Metro Operator of the Year accolade.

DLR is operated by Serco Docklands under franchise from Docklands Light Railway Ltd (part of Transport for London). With more than 99 million passengers in April 2012-March 2013, it actually carries more passengers than many heavy rail operators.

Serco has spent the past year focusing on improvements for its passengers, paying particular attention to reliability and customer service - a difficult challenge considering that 183,000 passengers rely on the DLR service during the morning and evening peaks.

Serving a total of 45 stations, the DLR operates through boroughs in east and southeast London into the heart of Canary Wharf and Bank.

Its elevated tracks make it a popular choice for tourists visiting the attractions in Greenwich and Stratford, providing passengers with scenic views across London from its fleet of driverless trains (especially if they can secure seats at the front of the carriage!).

Even though all the trains are driverless, Passenger Service Agents (PSAs) work on every train to ensure passenger safety and security.

In 2012 the main challenge for the DLR was preparation and operation during the London 2012 Olympic and Paralympic Games. DLR was the rail network that took on the most responsibility for transport during the Games, serving four of the main Olympic venues (Stratford Olympic Park, the Custom House ExCeL Centre, Greenwich Park and the Woolwich Arsenal Royal Artillery Barracks).

Almost 12 million passengers were carried during the entire Games period, and during the busiest times, passenger numbers reached more than double the normal level. Numbers peaked at around 500,000 passengers in a single day, over 125,000 more than DLR’s previous record. And yet, despite all that extra pressure, 2012 was DLR’s most reliable year ever.

To accommodate the increased demand, the operator developed a special Olympics Programme. It included ten bespoke timetables to run at different times during the nine-week Games period, running for longer hours and accounting for a 35% increase in train journey kilometres.

Serco calculated that an additional 45,000 staff hours would be required, and negotiated with staff, managers and the RMT union to ensure that everyone was on board.

Some 500 staff received customer service training, to allow them to engage with passengers and visitors during the Games, while in-house training was provided for 40 new PSAs and 120 new Station Crowd Control Managers.

Serco additionally recruited more than 600 volunteer Travel Ambassadors (through Transport for London and JobCentre Plus) to help spectators find their way to and from the Olympic venues.

With so many more passengers travelling on the DLR network, response to any disruption became even more crucial.

A Crisis Management Team was put in place (operating 24 hours a day, seven days a week) to provide on-call responses to service disruption. Additional staff were recruited in the Control Centre, and staff worked longer shifts to keep both employees and passengers informed.

One of the major challenges during the Games period was ensuring a consistent service remained in place for DLR’s regular commuters. It was important to communicate changes to the timetable well in advance of the events, to allow commuters to plan journeys accordingly.

In conjunction with TfL, Serco ran a Travel Demand Management (TDM) marketing campaign to keep passengers informed of changes. The campaign advised them of potential busy times and stations (so they could avoid them if possible), and encouraged the use of online tools to help them seek alternative modes of transport.

And 400,000 copies of a bespoke brochure (providing detailed information about station closures and changes to entrance/exit systems) were distributed to local businesses and residents.

Serco even had a team of seven ambassadors who staged around 60 open days and events in east London in the month before the Games, to distribute the brochures and talk to passengers about their travel arrangements during the summer.

All of this was aimed at preparing the DLR’s customers, as much as the staff, for the busy period ahead.

And it worked. On day seven of the Olympic Games (August 7 2012), the DLR broke a record. On that day the network carried more than 500,000 passengers, 73% more than on an average day, and more than ever before. On that same day, it also scored almost 100% for departures and reliability.

But the Games was not the only success story for DLR in 2012. Timetable changes and improvements to rolling stock and infrastructure have significantly improved the operator’s performance, with some impressive figures recorded.

Those figures were primarily driven by Serco’s focus on training its staff. The operator recognised that those people are responsible for more than just checking tickets and providing advice - they also make sure the trains leave on time.

Many additions were made to the training programme for Serco’s PSAs in 2012, including:

Accessibility training - helping PSAs to understand how wheelchair users can best be assisted, and how they would like to be treated.

On-the-job training - new staff trained on a working train, alongside a trainer.

Sunday training sessions - to enhance communication between controllers in the Control Centre and PSAs, allowing them to understand each other’s roles.

Incident Management training - 270 PSAs were given a specific course to help them deal with emergency situations.

The next major hurdle to improve performance related to engineering upgrades. Serco completely overhauled the doors and coupler mechanisms on some of its older trains, and replaced joysticks and air compressors to improve reliability. The signalling system was also upgraded, to minimise the risk of disruption from vital components failing.

Another part of this process was down to how engineers respond to faults.

Prior to the Olympics, Serco had two teams of First Line Response Technicians (FLRTs) stationed at depots in Poplar and Beckton. One team worked seven days a week, while the other worked five.

This was increased so that the existing teams were available on-site 24 hours a day, while a new FLRT team was recruited at Greenwich to respond to failures south of the Thames. Another ‘roaming’ team was then recruited to fix smaller problems around the whole of the DLR network.

This relentless attention to improvement resulted in DLR’s most reliable year ever, with 98.54% of trains running within three minutes of the schedule. Serco achieved 100% ‘perfect day’ departures on 16 days and 100% reliability on seven days. Small wonder that Serco has consistently been an exceptional, award-winning service.