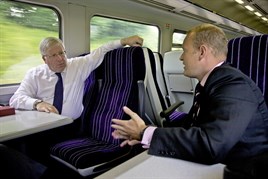 It was one of those out-of-the-blue phone calls that shakes up an ordinary day, and gets the juices flowing.

“Hello Nigel. Secretary of State’s office here. How are you? Look, the SoS is taking a trip north to Leeds, Settle and Appleby, and intends to visit Blea Moor signalbox. He wants to know if you’d like to spend the day with him…?”

Thankfully there wasn’t much to shift around in the diary (my apologies if it was you!). And so, on the day in question, I was leaving Peterborough spot-on time aboard East Coast’s 0851 for Leeds.

I’d done this once before, after a similar invitation from Justine Greening (when David Cameron staged a cabinet meeting at Soho Depot, in Birmingham, during a monsoon). It had been fascinating, so this was a no-brainer.

And just as on that occasion, I was taken aback and (yes) impressed at just how hard frontline politicians and their staff work. No, I haven’t ‘gone native’ - I’m just being fair.

On both occasions, both SoSs worked relentlessly through the day. Not a second was wasted either by them or their uniformly cheerful staff, who keep their boss fully briefed and ready from minute to minute.

At 1017 I joined McLoughlin’s group at Leeds, where he bustled down the stairs and onto the platform for the Settle train having already had a couple of meetings with Northern staff. He was accompanied by Northern MD-to-be Alex Hynes.

Again, spot-on time, the 1348 to Settle left Leeds in glorious sunshine - bound for the Yorkshire Dales and the glorious 72-mile
Settle & Carlisle Line. This is how the day unfolded…