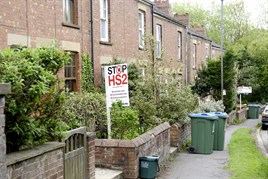 The plan to build a high-speed rail line between London and the West Midlands, and beyond to Manchester and Leeds, is the biggest public infrastructure project for a generation.

High Speed 2 is a determined effort not only to build new capacity to take the pressure off the already overcrowded West Coast Main Line and elsewhere on the rail network, but also to boost Britain’s ailing economic fortunes.

At £42.6 billion (plus £7.5bn for trains), it’s not cheap - the overall cost is already £12bn more than originally envisaged when the Government gave the go-ahead for the scheme last year. Even so, on June 26 the House of Commons voted to give a Second Reading to the paving bill for HS2, allowing it to proceed to Committee Stage with no significant or surprising opposition (RAIL 726).

The overall benefits arguably outweigh the cost of the scheme, but not everyone is happy. It would be fair to say that the political climate is slowly - but not unarrestably - turning more hostile towards HS2.

While the placards of those opposed are concentrated in the Chilterns, local authorities have pooled their resources to challenge the scheme under the ‘51M’ banner.

51M is a group of 19 local authorities, supported administratively by Buckinghamshire County Council, that have joined together in a national campaign to actively challenge the HS2 rail project. The name has been adopted to represent (in theory) how much HS2 will cost each and every parliamentary constituency… £51 million.

On its website the group, composed of authorites as diverse as Chiltern District Council, Lichfield District Council, North Warwickshire Borough Council, Three Rivers District Council and London Borough of Camden, wants to “emphasise the impact this proposed scheme will have on every taxpayer in the country for years to come”.

On March 15, Lord Justice Ouseley struck down nine out of 10 objections to HS2 raised by groups including 51M, the HS2 Action Alliance, Heathrow Hub and Aylesbury Park Golf Club - the result of a Judicial Review.

Having been unsuccessful, HS2 Action Alliance appealed the March 2013 judgement on its Judicial Review that had challenged the Government’s failure to properly review the environmental impact of HS2 and alternatives.

But no one has yet asked what effect all this public funding of legal action against the scheme is having on council taxpayers - and what might the liabilities be?

Take Warwickshire County Council. As a part of the 51M consortium, it is spending up to £540,000 of taxpayers money on fighting HS2 in the courts. But despite the council describing the number of objectors to HS2 as “significant”, research obtained by RAIL suggests that fewer than 2.3% of council taxpayers in the county have objected to HS2.

Meanwhile, the total number of Warwickshire residents who have responded to the consultation on HS2 itself, according to Freedom of Information requests seen by RAIL, is just 8,175. In itself, that’s not an insignificant number, but does it represent the views of constituents overall?

On a more localised level, having allocated up to £239,000 to oppose HS2, it is thought that Warwick District Council could spend £54.40 for each council taxpayer on its campaign against the scheme.

In total, for those living in the Warwick District Council area (also covered by Warwickshire County Council), the joint spend per HS2 objector is over £120. As local resident Fraser Pithie tells RAIL: “£500,000 can be saved by switching off certain street lights at night, only for over £500,000 to be spent on opposing HS2 when less than 2.3% of council tax payers have formally objected to it.”

In response, a letter (seen by RAIL) from Warwickshire County Council Chief Executive Jim Graham to a Warwickshire constituent says: “The worst case scenario is that the County Council will contribute £60,000 towards legal costs in the High Court and the Court of Appeal combined.

“Most of the money spent to date has been spent on expert advice to inform responses to Government consultation, which includes issues like the detail of the compensation options, and most of the £400,000 now set aside is likely to be spent on repsonding to the Strategic Environmental Assessment and securing the best design and mitigation for Warwickshire through the Hybrid Bill process.

“Even if Warwickshire supported HS2 in principle, these responses and this scale of costs would be necessary, and the amount pales into insignificance compared to the future cost of HS2 and the amount spent by the Government to bring it this far. Railways are really expensive.”

While Warwickshire is confident in its assertion that spending public money on a potentially unwinnable legal battle is justified, elsewhere on the proposed route divisions have surfaced among local politicians.

Buckinghamshire County Council has pledged a similar figure to Warwickshire - £500,000 over three years - to fight HS2.

But here, the issue of council taxpayers’ money being spent by smaller, district authorities is even more sensitive.

The area is largely rural and agricultural, with a large landfill site to the north (Calvert) and the M40 sweeping around its western and southern boundary. Its residents, however, see the rural idyll that they inhabit as immune to change at any cost.

Local councillors have still not been dissuaded from their opposition to HS2, despite enjoying the benefits of being served by Aylesbury Town and the recently built Aylesbury Vale Parkway station on the Chiltern line from London Marylebone, and despite the announcement of the construction of the Bicester-Bletchley (Western) section of the East-West Rail scheme (currently due to open in December 2017, and which will improve the links from Aylesbury Vale to Oxford, Milton Keynes and Bedford).

What’s more, RAIL understands that the council’s cabinet met in June to discuss the allocation of a further £100,000 in funds towards the legal fight.

Understandably, some councillors are nervous about the perception that will be given to the general public, when public services including education, social care and street lighting are all facing cutbacks.

The splits have become public, with even the anti-HS2 Bucks Herald reporting clashes among councillors debating whether more council funds should be spent.

Council Deputy Leader Michael Edmonds, and Cabinet Member for Environment and Health Sir Beville Stanier (both Conservatives) have both suggested that the figure could be halved. But the money is intended for legal fees - and lawyers don’t come cheap.

“I think it’s right that we should go on and provide funding to continue the fight,” says Edmonds. “But £100,000 looks a lot of money.”

Stanier adds: “The public is very conscious of how we are spending the money. I think it would look wrong to go for another £100,000 at this point in time.”

Neil Blake, cabinet member for resources, says the public would need to be convinced that the money will be well spent.

But Cabinet Member for Community Matters Pam Pearce (also a Conservative) appears to sanction a blank cheque for fighting HS2. In her view, there is “nothing bigger and more detrimental to the Vale than HS2”.

“To appear to be backing down at this stage would mean that we have wasted the money we have spent so far,” adds Pearce.

“If they were putting £100,000 to fighting the environmental impact or get the best mitigation then I would do it,” he says. “They will not get my support to line lawyers’ pockets. I will face down my constituents on that. We have families on the breadline. It’s not acceptable.”

With Aylesbury Vale’s leaders expected to report back to the full council on how the money is being used, local authorities apparently feel they have no choice but to divert funds otherwise intended for public services to the cause of fighting HS2.

This is possibly spurred on by the lack of interest in the campaign shown by Buckinghamshire’s representatives in Westminster.

Chesham and Amersham MP Cheryl Gillan resigned her cabinet post as Welsh Secretary last September in order to fight HS2, but the Telegraph revealed earlier that year that Gillan had, in fact, sold her home in Amersham - “a 17th century terraced house 500 yards from the proposed Birmingham to London train route”.

Gillan moved to Epsom in Surrey, 30 miles away from her constituency, citing “mobility problems” for her and her husband.

While Aylesbury MP David Liddington has been actively pursuing the anti-HS2 cause (judging by his website and correspondence with HS2 Ltd Chief Executive Alison Munro in the local press), the case of Gillan is relevant. The job of an MP is to represent the interests of their constituents in the House of Commons, and in Gillan’s case, that would appear to mean being a strident voice against HS2.

Aylesbury Vale has already agreed that, as well as legal fees, much of the money it has proposed is simply to be spent on employing people to lobby on the HS2 Hybrid Bill - in Parliament.

Professional lobbyists employed by public relations consultancies will instead do the job of attempting to persuade decision-makers of the need to scrap the scheme. If MPs can’t represent their constituents on an issue supposedly important to them, what are they for?

While Aylesbury Vale says it won’t spend all of the money at once, it wants to have the funds available when needed - although as RAIL went to press, the plan had yet to be approved by the full council.

No local authority appears to want to say what their limit is, or (when funds for public services are already stretched) where the reserves are coming from to fight complex legal battles with the government.

While the political battle also rages on, HS2 Ltd continues to prepare for construction of the line, assuming that Parliament approves it.

The people of Aylesbury Vale, Warwick or Kenilworth might not have an HS2 station in their areas. But how much is it really costing them?