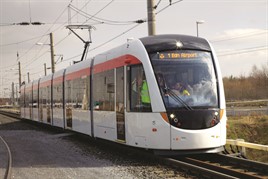 Edinburgh is a historic city, famous for many of Scotland’s most endearing engineering landmarks - the Georgian New Town, the crossing (both road and rail) of the Forth and, more recently, the construction of the Scottish Parliament at the bottom of the Royal Mile.

It is in this illustrious company that the backers of the tramline for the city’s streets hope to see the project being bracketed.

Richard Jeffrey, the Chief Executive of Transport Initiatives Edinburgh, the company formed by Edinburgh City Council and whose remit includes delivery of the tram project, says that the trams are “transformational” and, like those historic achievements, will change the city forever.

Edinburgh is also famous as the home of the Scottish Enlightenment and, as some would have it, the birthplace of critical thinking. This is apt, as the tram project has certainly attracted its fair share of criticism. It has survived an attempt to cancel it by the Scottish Government, and has survived some of its plans being rejected in a referendum. It has also survived brickbats from some claiming that the project wasn’t needed, because of the city’s award-winning bus service.

Susan Clark, Programme Director of Edinburgh Trams, says the reason for the project was the increasing demand for jobs, and hence a growth in the city’s population (it is predicted to rise by 45,000 between 2004 and 2024). This will put huge stress on the already at capacity road system in Edinburgh itself, so, says Clark: “The idea of the tram was to create an integrated transport network for Edinburgh, because more jobs and more people doesn’t have to mean more time spent in a traffic jam.”

Hence, work started on the idea of a tram for the city. But in a February 2005 vote, the city’s residents rejected plans for a congestion charge, which would have provided funding for three tram networks serving the North, West, and South East of the city.
In the end, however, this rejection only affected plans for the so-called Tramline 3 to the South East. Planning went ahead for the two other lines, going through the Scottish Transport Appraisal Guidance process to assess their benefit across a range of factors, including the economic, environmental and social benefits.

Acts of Parliament authorising these received Royal Consent in May and April of 2006 respectively, and enabling works began in September of that year, followed by utility works in March 2007.

It was during the parliamentary process that the political divisions that would come to mark the project were crystallised. The tramline 1 Bill was passed on a vote of 84 for, 17 against (with one abstention), with the Scottish National Party the only dissenter. The same party voted against the Bill for line 2, where the verdict was 88-20 in favour, with Kenny MacAskill, then transport spokesman for the SNP, saying the bills were “fundamentally flawed”.

During the progress of the bills, then Scottish Transport Minister Tavish Scott told MSPs that the Scottish Executive would index-link its contribution of £375 million, taking it to somewhere in the region of £450m-£500m. In addition Edinburgh City Council had already pledged £45m towards the cost of the project, taking the total funding to the figure at which it remains - £545m.

The SNP went into the 2007 Scottish Parliamentary and local authority elections saying that investment in modern buses was more effective than the tram project. The party proposed the cancellation of both the trams and the Edinburgh Airport Rail Link, although only the latter was ultimately axed.

Both projects underwent an audit by the Auditor General for Scotland, and following a vote by the Parliament in favour of the tram project in June 2007, the government agreed to, in the words of Finance Secretary John Swinney “accede to the will of Parliament… mindful of the level of public expenditure that has already been committed to the trams project”. He limited the Scottish Government’s financial commitment to the project to that aforementioned £500m.
By this time, the delivery of the project’s lines outlined in the Parliamentary Bills had been renumbered. The main tram route, line 1a, was an amalgamation of those original plans, running from Edinburgh Airport to Newhaven, via Haymarket, Princes Street and Leith Walk, with line 1b from Haymarket to Granton to be funded by any leftovers from the £545m. However, this was subsequently postponed in April 2009, because of the recession.

Having survived the axe, the project’s final business case was then approved in December 2007, with the main contracts let in 2008.

The contract was let to an infrastructure company consortium of three parties - Bilfinger Berger to carry out construction of the tramline itself, with technical infrastructure to be supplied by Siemens and the trams built by CAF.

“To have gone through that STAG process, gone through that parliamentary process and to have come out at the end with two Acts of Parliament and the funding in place shows people that this was a robust transport option going forward into the future,” says Clark.

The project enjoys support from both business organisations and environmental groups, although support is far from universal. Many have questioned the need for the scheme, given the city’s extensive bus system, while others have been upset by the disruption to businesses, and the cost of the plans.

So is Edinburgh Trams delivering an unpopular project? Clark contends that any criticism is just “growing pains” of being affected by the disruption.
One aspect that has attracted criticism is the utility diversion plan. Work to divert underground utilities (pipes and cables) is “definitely later than planned” Clark said. John Carson, former head of Miller Civil Engineering, has said the utility plan “was not practical”.

However, Clark responds that by the time this phase of the work is completed in April or May, 48km of cables and gas and water pipes will have been replaced and diverted, including some that were 130 years old. Clark says this is part of the benefits brought by the trams, in that it has “upgraded the utility asset of Edinburgh for the people of the future, so that means better broadband facilities, and more reliable power, water and gas supplies”.

She says the structure of the utility works in one contract was in response to the National Audit Office’s report on light rail projects in 2004. Edinburgh was the first light rail project to get the go-ahead after that report, which had concluded that systems so far delivered, such as Croydon Tramlink and Manchester Metrolink, could have realised greater benefits and took too long to be put in place.

Meanwhile, a dispute between TIE and the Bilfinger Berger-led consortium over contractual matters has cast another shadow over the project. The row broke out in February 2009, a day before work on the Princes Street section of the route was due to begin. And even though work on Princes Street finally began on March 23, the dispute is still ongoing.

Recent press reports have even claimed that the contract with Bilfinger Berger may be cancelled, with Jeffrey admitting there is “no sign of a breakthrough” in the dispute.

Clark adds: “We have to keep working with Bilfinger Berger and Siemens and CAF. We are working very hard with them to deliver a completed project in Edinburgh. We have a lot of work ongoing, and our focus has to be on ensuring that this project is delivered for Edinburgh in a value for money way.”

The situation has meant that while most of the track laying in Princes Street is complete, with only two small sections remaining, on-street track laying on Shandwick Place and Leith Walk has not yet begun. Clark says there is no start date for these works.

On the plus side, Clark says completion of Princes Street on November 28 was a “milestone”.

When it re-opened and before traffic returned, “people were spilling out onto the road, and were saying this is fantastic, it looked great, and ‘will I get a tram in five minutes?’ People really enjoyed the street being opened up for them and no traffic running along it.”

Given this excitement, she can understand the frustration that people in Edinburgh are feeling at the project’s more controversial aspects.
“However, our job is to deliver a value for money product for the taxpayer, and I think they would agree it’s not in their interests for me to speculate about cost and time when that could be used commercially in our negotiations with our contractor.”

As for cost, Jeffrey says: “I’m still targeting the team for a final project cost of £545m”, although he adds this is a “very challenging” target.

Carson, meanwhile, has speculated the project could yet top £1 billion in costs. “I think at some stage they’re going to have to go back to Bilfinger Berger to ask how much this project is going to cost,” he says.

Meanwhile off-street works, where there is less utility work to contend with, are progressing. A viaduct at Haymarket is about 35% to 40% complete, a viaduct near Edinburgh Park itself is over 80% complete, and abutments for a viaduct at Carrick Knowe are in place.

The new tram depot at Gogar is another example of significant progress. There are plans for the first of the tram vehicles to arrive in Edinburgh in April, after they have completed testing in Germany.

For a project that has already gone through so much, Clark remains enthusiastic about the impact the trams will have.
“Our aspiration would be to not only to deliver this phase of the tram system, but to deliver future phases of the tram system, and turn it into a true network, as opposed to the spine we are creating at the moment.”

Where would these go? Line 1b was intended as the next stage initially, but there is “a lot of pressure for tramline 3”, says Paul Tetlaw, of environmental transport campaign group Transform Scotland.

The economic and political climate will dictate what can be done. But Clark adds:
“Once the tram has been implemented in Edinburgh, the people will love it. If you look at the experience of other cities that have introduced trams, they have always gone through a phase when the project has been unpopular. But on implementation it’s soon forgotten about - people love their tram and are clamouring for more.”