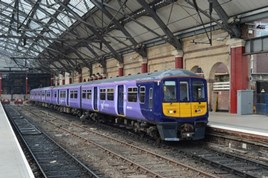 They may be 25 years old, but the Class 319s entering traffic as ‘new’ trains in the North West are nevertheless proving popular.

The four-car electric multiple units have been described, variously, as “cast-offs” and “unwanted”. There have been cries that the South East has benefited from new trains, while the North is left to make do with its leftovers.

But those who operate and use the ‘319s’ in the North, and those who are waiting to use them, do not seem to be giving that impression.

The first train ran on March 5 (RAIL 770). Operated by Northern Rail, they currently run only between Liverpool Lime Street and Manchester Airport, with hourly departures for most of the day from each starting point.

Two Class 319/3s are used, although for a period during the middle of the day, one of the ‘319s’ is stabled at Lime Street to act (effectively) as a rescue unit in case of failures. The first train was the 0616 Liverpool Lime Street-Manchester Airport, formed of 319363.

Northern Rail Managing Director Alex Hynes said on luanch day: “This is an exciting time for our customers in the North West. Being able to deliver these electric services to them is the culmination of years of planning and will mean more seats, more space and improved journeys for our customers.”

Hynes tweeted on that first day: “Thanks to hard work of @northernrailorg team we will provide millions more seats this year, as our fleet grows by 10%, starting today.”

Also on March 5, Network Rail Route Managing Director Martin Frobisher said: “This first electric train to travel between Liverpool Lime Street and Manchester Airport signifies the completion of the latest stage of a much bigger electrification programme in the North West.

“When the North West electrification upgrades and network improvements are completed in 2019, they will deliver significant, long-term benefits to passengers across the north of England.”

The trains form the first part of the NW Electrification programme that, when complete, will transform services in the region.

Gone will be two-car, cramped diesel multiple units on lines starved of major investment. Instead four-car EMUs will glide in and out of stations on their way to various destinations.

Eventually the trans-Pennine routes will also be wired, and it is hoped that perhaps the entire northern railway network will be electrified (RAIL 770). While that remains a long-term ambition, the immediate hopes are to get the ‘Northern Electrics’ brand performing, to have sufficient ‘319s’ available, and to ensure that the next stage of EMU running can begin (as hoped) in May. It is a busy time.

At Manchester Rail Operating Centre (ROC), Northern Rail’s Control Operations Manager Adrian Bedford is watching over the region. His job, in effect, is to keep the trains running.

The ROC opened in July 2014. It is adjacent to Ashburys station, and houses Network Rail, Northern Rail and First TransPennine Express staff who work together when there is disruption. They are in the same room, with each company using an island of desks. Northern has 23 staff based here, plus a further five maintenance staff members who provide technical support to train crew.

Bedford explains how members of his team look after specific geographic areas of the region - for example, one looks after Manchester while another is dedicated to Manchester South. There is also someone dedicated to the Class 319s, the only class-specified role.

“We have so many Metro trains that we need one to look after the Liverpool and Wigan area,” says Bedford. “It is a different operation, and it also looks after Allerton operations .”

He adds that certain nuances also have to be considered with the ‘319s’: “Lime Street is short for platform length. We need to be careful for maintenance, too.”

Bedford explains that the reason a ‘319’ waits at Lime Street during the day, rather than heading to Allerton, is because the Merseyside depot has its overhead line equipment (OLE) isolated during the day.

It can be switched on (and in time it will be), but at the moment that process takes 90 minutes. This means that by the time a ‘319’ can come off depot, the train (in theory) would have lost a complete journey between the two North West cities.

It also helps Northern for the time being, as Bedford acknowledges: “We know where the other ‘319’ is at the moment.”

He explains the driving arrangements. The ‘319s’ run across the Chat Moss line. Manchester Piccadilly drivers sign the route to Deansgate, with Liverpool Lime Street drivers signing it across to Merseyside.

“We have the perfect recovery plan. We know there is a set at Lime Street, so we know we can rescue one. It is dead easy in theory.” He adds that in the Manchester area, a Northern Class 323 could be deployed to rescue a failed ‘319’ if necessary.

Bedford highlights that for the moment, the contingency has actually been reduced because crossovers on the Liverpool-Manchester phase of electrification have not yet been wired.

He tells RAIL: “At the moment it is not wired, so the set is parked at Lime Street. There is a contingency, but it is not what it was. Touch wood - the ‘319s’ are good, they don’t fail. They are not complicated - the bits and bobs are not too much different to the ‘321s’ and ‘322s’ that we have, so there is experience within my team.”

On March 17 (the day of RAIL’s visit to Manchester ROC), there were four Class 319s available. There was also one at Preston for driver training to Carnforth, one for Liverpool-Crewe training, and one static training at Stockport. The trips to Carnforth are for crew training - the ‘319s’ will not run there in service.

“The next part of the project is passengers between Liverpool and Wigan in May. Route proving will be done at night,” says Bedford.

Northern will need eight trains at that point. Currently the route uses two DMUs that rotate. Bedford thinks that will be the case for the ‘319s’, but admits he has not seen the full details. He adds that pairs of Class 319s can run on the current electrified route, but that this would mean limited stops because of platform lengths.

The ‘319s’ will also prove their worth in May, when Liverpool hosts the ‘Three Queens’ event. As part of the Mersey River Festival, Cunard’s Three Queens - the Queen Elizabeth, Queen Victoria and Queen Mary 2 - will visit the city to mark the 175th anniversary of the cruise line. The event is expected to bring up to a million people to the city, and Bedford enthuses: “To have a big train to take people is such a great solution.”

The EMUs have created a buzz among passengers, he says.

“We encourage interaction. When we launched them, people helped. We had hashtags ready on Twitter. Some passengers have said they have changed their lives.

“People didn’t know they were being introduced. They ask: why is it coming? When are there more? It is like a constant ‘coming soon’.

“It is interesting to watch the buzz. They are generating interest - people want to know. If you used to travel on a ‘142’ and you now have an electric, then they are new. I went to Brighton for a football game and used a ‘319’. It was horrible, but now it is like a transformation of the set.”

However, he warns of more hardship ahead for passengers, with weekend closures to enable the re-boring and digging out of Farnworth Tunnel (RAIL 768).

“That is one of the biggest things we will do as a company. The challenge is tangible services. The end of the work is sensational, but there’s hardship. It’s so complicated for Farnworth.”

John Lowe is a Conductor Manager for Northern Rail. He says of the ‘319s’: “The conductors love them, they are amazed.”