How the West will win with new trains 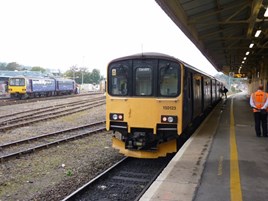 Just because a particular region is not receiving overhead line electrification, doesn’t mean that it still won’t benefit as part of the new First Great Western franchise that begins this September (RAIL 771).

The 42-month deal signed with the Department for Transport includes new trains and a huge capacity increase, with the opportunity for further investment in the future should a deal with Hitachi for a minimum of 29 AT300 bi-mode trains be completed. This includes an option for a further 30 trains if the need arises, and that need has not 100% been ruled out.

While the headline new trains are the Intercity Express Programme (IEP) trains that have started arriving for testing ahead of their entry into traffic in 2017 (RAIL 771), the improvements will be felt all the way from Paddington to Penzance via Bristol, Weymouth, Cardiff and Exeter.

Starting in the Thames Valley, electric multiple units will replace the majority of the Thames Valley Turbo trains. There are 151 Turbo vehicles used by FGW here, and 108 will be cascaded west as 21 Class 365s (84 vehicles) and 29 Class 387/1s (116 vehicles) arrive from Govia Thameslink Railway to replace them.

An additional eight brand new Class 387/1s will also be constructed (32 vehicles), giving a total of 232 EMU vehicles compared with the current 151 DMU vehicles. According to an FGW statement on March 23, the EMUs will raise capacity by 25% in the high peak.

The new ‘387s’ will be constructed once the Gatwick Express Class 387/2s are completed next year. Bombardier will build them at Derby Litchurch Lane.

FGW Engineering Director Andy Mellors told RAIL on March 31 that the arrival of the ‘365s’ was a huge boost, as originally it was believed that older Class 319s would move to the operator. He says the Class 387s will arrive first from GTR. The ‘365s’ will arrive later, but need some minor work.

“They need Driver Only Operational CCTV fitted on them. We have that fitted on a mixture of the Turbos. The ‘365s’ will have the in-cab equipment fitted.”

However, the implementation of Driver Controlled Operation (DCO) is only being discussed, while FGW plans to recruit more than 100 customer-facing staff for trains.

The ‘365s’ will also be fitted with Dellner couplings. This means all EMUs will be fitted with similar systems, so that if there is a failure they can be pushed out of the way by another train.

Currently the longest trains on the Thames Valley are six-car DMUs. Mellors says that the Class 365s will not operate in more than eight-car formations (pairs of ‘365s’), while the Class 387s will run up to 12-car trains. Eventually maintenance will be carried out on the EMUs at Reading, but until the Great Western Main Line from Hayes to Reading is wired, other options are being explored. “There’s direct access to depots in the London area,” says Mellors.

He adds that FGW is also exploring the possibility of Independently Powered Electric Multiple Units (IPEMUs), and has studied the trials of 379013 on the Manningtree-Harwich branch to assess its capabilities. “We are in discussions now, and are keen to find a resolution.” He suggests that trains to Bedwyn and Gatwick could use them.

The cascaded Turbos offer a 52% increase in capacity in the Bristol area, although the Class 16x fleet moving west will require some minor infrastructure modifications because of the trains’ width. FGW will also modify their nominal ride height.

Regarding the cascade, Mellors tells RAIL: “There are really three phases. Initially, a couple head west. They’re effectively released by the introduction of EMUs. That allows the Bristol area to introduce controlled training for crews. We can train people there.” The trains will be based at St Philip’s Marsh.

Initially two Turbos will be used on the Severn Beach branch, which has been chosen because it is self-contained. They will replace Class 150s, adding 250 seats to the route. In turn, that allows six Class 150 vehicles to move to Exeter.

Mellors explains: “The rump of the cascade is geared around May 2017. You may start to see more EMUs before that.”

This is when the Thames Valley benefits from a vastly improved timetable that will have been recast to make use of the EMUs, and when most of the 16x fleet can head west as the ‘365s’ and ‘387s’ will be in place.

“The back end of the cascade sees all the Thames Valley branches wired late. Reading-Basingstoke, Windsor and Henley are all wired in 2018,” says Mellors.

The Turbos are currently being fitted with WiFi equipment, in an internal FGW project. By March 31, FGW had fitted eight trains, with two treated each weekend.

This is a new franchise commitment, but one that FGW plans to complete early. The work is being carried out now that the FGW High Speed Train fleet has been completed (with WiFi free in both First and Standard Class). FGW’s Sleeper fleet has also been completed.

With the Turbo introduction in the Bristol area, that releases DMUs to move to the Exeter area, offering a 58% capacity increase in the Devon region. Class 150/2s and ‘158s’ will move west.

One of the challenges the industry faces is the Passengers of Reduced Mobility - Technical Specification for Interoperability (PRM-TSI) deadline of January 1 2020. The two ‘150/0s’ can be modified, and will offer three-car capability for the Exeter region. “They are good for seating and have one toilet per train. They offer flexibility for capacity,” says Mellors.

He says retaining the ‘150/2s’ makes sense because as FGW wants to run mainly four-car trains in the Exeter region, the retained DMUs have through gangways (whereas the ‘150/1s’ do not).

All the branches in the Exeter region will use Class 150s except the Barnstaple branch, which will have ‘158s’ because journeys tend to be along the full-length of the branch. There are also planned journey time improvements.

“The key issue for Exeter is that it is the hub for the Devon Metro,” Mellors tells RAIL. “There will be four trains per hour in the peak. Exeter is the right place for a facility. There will be investment in the facility there, but we are evaluating options in respect of the current site.”

He says that options are even being discussed with Network Rail about moving the depot, which is currently next to Exeter St Davids station. “Riverside is a big site,” he says, adding that the currently facility is constrained. “It’s a two-car shed and we will run at least three-car trains. Not all return each night, but there just isn’t the space now.”

Once FGW has completed fitting WiFi to its Class 16x fleet, attention will turn to the Class 158s. When they are done, the ‘150s’ (those staying with FGW) will be treated.

At-seat power is also a commitment for the franchise on the DMU fleet, and where possible USB ports will be installed.

Mellors says: “The Class 166s have air-conditioning, and we are committed to fitting air-cooling equipment to the ‘165s’. They will work on the routes Class 158s are on.”

Further west, Penzance Long Rock depot is to be upgraded, in readiness for looking after the Sleeper stock and locomotives when Old Oak Common is closed. It is being upgraded as part of the Cornish Rail Programme - facilities are to be enhanced for DMUs, and capacity will increase.

Passenger services will be half-hourly between Penzance and Plymouth, with a mixture of FGW HSTs to London and FGW ‘158s’ running to Bristol and Exeter. A small number of CrossCountry Voyagers will also operate trains.

Times are changing on the FGW routes, with capacity increases across the region. The Great Western is often forgotten, as other regions shout more loudly. But with new and cascaded trains, that is no longer the case.

“We have explored every avenue to try and keep trains running, but sadly it is not currently financially viable to run our services" - Hull Trains MD

Hopwood: "We are having constructive talks with the DfT as regards a new contract. Another potential outcome is that the current contract will end."