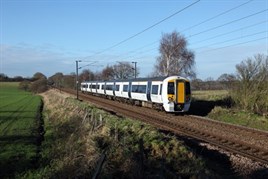 Amid all the talk of rebuilt Pacers and Tube trains, it may have escaped people’s attention that another alternative to electrification or new-build diesel multiple units is available. What’s more, testing of this option has recently been completed.

The Independently Powered Electric Multiple Unit (IPEMU) is something that could appeal to operators on those occasions where DMUs could still be required.

The concept here is that electric multiple units are fitted with battery technology, enabling them to run under their own power away from overhead lines. And it certainly fuels the debate that is raging at the moment regarding the future for certain routes.

Could London Underground D78-Stock, rebuilt for heavy rail, be an option?

What about Pacers? They are seemingly detested by passengers, yet the belief that they could all be withdrawn by 2020 has potentially been blown out of the water by Porterbrook’s rebuilt ‘144’ (RAIL 768).

Some believe that new-build DMUs could be the answer. Rail Minister Claire Perry has actively called for that option, and manufacturers such as CAF and Hitachi have not ruled out building such fleets. The former delivered DMUs to Northern Ireland in 2011-2012, while the latter says its AT100 and AT200 concept trains could also include a diesel variant.

A four-car electric multiple unit (379013) was selected last year and moved to Derby Litchurch Lane for modifications last May, before being taken to Old Dalby for testing.

Then, in January this year, it moved to Ilford, from where main line testing was conducted for one week (beginning January 5) on the Manningtree-Harwich Town branch. The following week it carried passengers, after which in-service testing continued until February 13. It was returned to Derby on February 17.

At an event held for VIPs on February 9, RSSB Director of Innovation David Clark said of the IPEMU: “It is a great example of cross-industry collaboration. The cost of a demonstrator was not feasible - it needed partnership, and that is what we got.

“This idea came from the Rail Technical Strategy, and there are opportunities to look at parts of the network that are not electrified.”

He expanded on that point by explaining the electrification schemes: “Only 60% of the network makes a business case for electrification. That means 40% needs an alternative.

“66% of DMUs are more than 20 years old. They need to be replaced, or we need to think of something different.” Clark said that the idea for the IPEMU came partly from the automotive industry.

NR Principal Engineer James Ambrose explains why a Class 379 was chosen. “We wanted a second-generation electric multiple unit. It had to have regenerative braking.

“The first to be fitted with that, I think, were the Class 323s. We needed a timetable and performance that matched it. The plans had to match something that was already ‘out there’. Later-built trains are power hungry, as they have power sockets and air-conditioning.

“A Class 379 was chosen as they are three to four years old. They are power hungry, and the thinking was that if it works on a Class 379 it should work anywhere.”

‘It’ is the battery technology. The Class 379 is fitted with 396 3.2 Volt cells, each the size of an AA battery. Twelve cells are connected in series, in a row (which equals 38.4V), and there are 33 rows connected in parallel to form a Volt Battery.

Two Battery Rafts are connected in parallel to the solebar of the Pantograph Trailer Standard Open (PTSO) vehicle on the ‘379’ (61913).

Their creation follows the successful testing of several types of battery technologies, including Lithium Iron Magnesium and hot Sodium Nickel Salt. And Ambrose says that the rafts can be made bigger, if needed: “This is plug and play. There is no reason it could not go on other trains.”

Different battery technologies could also produce different results, he explains, with Lithium likely to be able to last up to 15 years.

However, he warns of possible problems: “Bigger batteries produce more heat. The raft is also eight tonnes, but with various trade-offs we made the vehicle five tonnes heavier . There are gains in going bigger, but you lose power.

He adds: “There’s a desire for more electrification, but it is not viable to electrify all of the railway, so is there another answer?

“Low bridges, for example, are very expensive to wire due to the infrastructure. Trains may be able to coast, but a train could ‘sit down’ . Long-distance Independent Power could help, but the big win could be ‘gaps’ such as travelling from east to west across a line that is not electrified.”

Ambrose believes that there are plenty of benefits to the project: “There are reduced rolling stock costs, it will be a far better way than relying on fossil fuel for power, and there are reduced electrification costs.”

He says that passengers should also find their ticket prices cheaper, as a result of other costs being reduced and not being passed on to the fare box.

“Diversionary routes could be opened up, too,” he notes. “There would be increased availability, and an IPEMU would be greener, cleaner, smoother and quicker than a DMU.”

IPEMU tests to end this week