A valuable window into the railway’s future 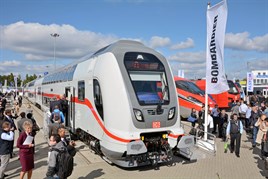 Tim Shoveller might wish he could get his hands on some of the latest double-decker stock displayed at the InnoTrans trade show in Berlin.

The South West Trains chief executive recently told RAIL that with demands on the lines out of Waterloo expected to reach bursting point, double-deck trains between there and Basingstoke might even be considered as a solution (RAIL 757).

As Shoveller well knows, there are obvious loading gauge problems before such a solution could be realised in this country, but such trains have been common on parts of the continent for decades. Indeed, when visitors to InnoTrans weren’t at the show itself, they might well have been travelling upstairs on one of the high-capacity double-deck sets that glide through the German capital.

This year, Bombardier had two versions of its capacity-boosting double-decker trains on display. France’s state railway SNCF is taking the OMNEO, which alternates single- and double-deck cars, and which Bombardier claims is the first double-deck articulated electric multiple unit.

Nor are modern double-deckers only about providing local or regional travel - Deutsche Bahn in Germany is taking a long-distance version (the TWINDEXX Vario Intercity), which it plans to use locomotive-hauled/propelled to serve cross-country routes.

Yet despite talk of possible future South Western double-deckers, or the presence at InnoTrans of a small number of UK-bound vehicles such as Siemens’ Class 700 for Thameslink (RAIL 758), it’s tempting to think that many of the products there have little relevance to this country. Not least because of the same thing that hinders British double-deckers - loading gauge. Much of what is used on the continent simply won’t fit.

However, like the car industry, today’s railway manufacturers largely focus on standardised platforms that can be adapted to serve different specific territories - after all, we live in an increasingly globalised market.

So while there was great interest from the UK rail media in March when Direct Rail Services launched the first Class 68 at Crewe (RAIL 745), more than 100,000 visitors to InnoTrans back in 2010 could have seen the locomotive nearly four years before its British launch. Or at least, they could have seen the very similar machine that is its inspiration.

That’s because the Vossloh-built Class 68, designated by that company as its UKLIGHT, is a derivative of Vossloh’s EuroLIGHT, squeezed to make it fit into the UK’s more restrictive envelope. Having been shown off at InnoTrans two shows ago, the EuroLIGHT itself is hardly a new product these days.

With 145 vehicles on display in 2014, visitors could see alternative approaches towards a fuel-saving, environmentally friendly future.

Alstom used InnoTrans to launch its hybrid diesel locomotive based on its H3 platform - a modular three-axle design that can take different engine combinations. Developed at Alstom’s Stendal plant in Germany, the hybrid H3 has a 350kW diesel generator charging a battery (its total output is 700kW), and it’s believed the locomotives will spend 50%-75% of the time in battery mode, depending on use.

A different variant of the H3 has two diesel engines, in an approach that more closely echoes that taken by Bombardier with its TRAXX. The TRAXX family has been around for a while, but for InnoTrans 2014 the Canadian manufacturer decided to highlight two variants: its multi-engine diesel, and the AC F140 Last Mile electric with diesel capability.

Bombardier claims that by being able to adjust the number of engines in use at any one time, the multi-engine diesel TRAXX can save fuel over locomotives fitted with a single engine.

With the ‘last mile’ diesel on an electric, Bombardier is chasing different advantages. Trains that run under the wires for all but short sections can avoid either having to run diesel-hauled throughout or changing locomotives, while separate shunters for non-wired yards can be redundant.

What of that other hot topic in the UK: high speed? While HS2 is still years away, the latest generation of train for the high-speed network in Italy is expected to enter passenger-carrying service next year.

Claimed to be the “world’s most stunning train”, the Frecciarossa 1000 is designed to meet European TSI regulations (meaning it should be truly international), and is planned to run at up to 360kph (224mph).

Built in Italy under a collaboration between AnsaldoBreda and Bombardier, the Frecciarossa 1000 is also known as the Zefiro 300. But whichever term you use for it, the streamlined red and silver unit is certainly a head-turner.

However, it’s not just about the outside, as the interior chosen for Italy’s operator FS also demonstrates real ambition for the possibilities of rail. While the big argument being deployed for HS2 might now be about capacity, the Frecciarossa 1000 shows that high speed can be about much more than moving as many seats as quickly as possible.

Need to conduct a business meeting? No problem - this train has a special compartment complete with conference table. Alternatively, at its ‘top end’, passengers can enjoy spacious 1+1 seating…

Meanwhile, over at the Hitachi stand, visitors could see a model of the forthcoming Class 800. There’s no InnoTrans next year, when the first train is due to arrive in the UK from Japan, but could IEP be an exhibit for 2016?

Yet while shiny new trains are the biggest headline-grabbers, the technology proffered at a show such as InnoTrans will always be about much more - whether it’s diesel engines to meet the new IIIB European emissions regulations, track products, tunnelling techniques or passenger displays. Indeed, the interior stands now take up all of the 27 halls available at InnoTrans’ home, the Messe Berlin exhibition centre. And exhibitors this year came from 55 countries.

Over the past couple of decades InnoTrans has grown from a fairly modest event into the world’s biggest rail trade show. This year’s record-breaking event has once again shown that it’s the place to be seen and to do business - and that the international rail business is vibrant and advancing all the time.

How much of what was there will come to the UK? Maybe you should ask that question again in four years’ time…