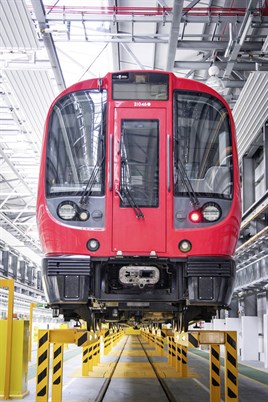 Use the London Underground regularly, and it’s easy to start taking the service for granted, and to forget that the trains that get you from A to B all need regular maintenance.

Behind the scenes, LU depots play a crucial role in keeping the complex system running efficiently. And the more advanced the trains become, the better the facilities that are required.

Introducing a new fleet of trains brings a multitude of new responsibilities for all involved. So when London Underground decided to introduce a fleet of 191 Bombardier S-Stock trains, it meant a major £240 million upgrade of Neasden Depot to help maintain them.

Neasden is a 64-acre site that has been a railway location since 1882, when it was opened as a locomotive and coach plant. It is now one of LU’s largest sites, and one of the biggest depots in Europe for passenger rolling stock.

S-Stock trains come in two variants: seven-car ‘S7s’ designated for the Circle, Hammersmith & City and District Lines (the latter is not yet officially running S-Stock at the time of writing, but testing and training has taken place), and eight-car ‘S8s’ for the Metropolitan Line (all 58 have been delivered and are now in service).

The £240m upgrade is split into two phases. Phase A (£180m) was completed in August 2013, and allows for the routine maintenance of the ‘S8’ fleet. Phase B will enable Neasden to provide heavy overhaul facilities for all 191 S-Stock, and is due to be completed in 2016.

Neasden is one of four depots that services sub-surface railway stock, alongside Ealing Common, Upminster and Hammersmith. But it has ‘super depot’ status in the maintenance of these vehicles (which has driven the need for the upgrade), because of the significant differences between the new S-Stock and the old A-Stock, C-Stock and D-Stock trains that they are replacing on the sub-surface lines.

For example, S-Stock are the first Underground trains to have air-conditioning, and to maintain it access to the top of the train is required. New high-level platforms at Neasden allow for inspection, cleaning and removal of the heating ventilation air conditioning (HVAC) units.

Also, S-Stock trains are fixed into seven/eight-car formations, whereas the earlier stock could be split into two/three-car multiple units (S-Stock can be split, but there are time implications for the maintenance if they are). Facilities have therefore had to be extended to accommodate the longer vehicles, mainly in the wheel lathe buildings.

A new train lifting facility is one of the most significant aspects of the overall upgrade - the train-lifting machine is one of only a few of its kind in the UK, and allows an entire ‘S8’ to be lifted from under the wheels. Unlike main line trains, the bogies on S-Stock units aren’t mechanically retained under the train, so lifting under the wheels is the best way.

Part of the reason that lifting the whole train is necessary is that S-Stock trains also have a number of large modules under them, requiring more access to the underside than is needed with a different type of train.

‘Swimming pool’ pits (now common in many depots) have been installed in the lifting facility, to provide easy access to the underside of the train once it has been lifted. The pits are about four metres deep, and house the jack and train lifting equipment. Part of their appeal is that the floor is left flat and free of equipment when not in use.

The lifting system means that an entire S-Stock unit can be raised to a height of 1.75 metres, although a height of 1.40 metres is preferred for bogie exchange. With this method, the whole train can be lifted and ready to work on in around 35 minutes, compared with the roughly eight hours that it would take for an equivalent preparation.

That might seem like an exaggeration, but without the lifting system you need to split the cars, the couplers and the gangways, then prepare the train for separation, tow the cars apart, disconnect the bogie from the necessary car, rig it with a tandem crane lift, bring in the car body supports, lower the car down, replace the bogie, and then put them back together again!

With the new train lifting system, a bogie exchange takes approximately two hours. Six hours saved per bogie exchange over the life of every S-Stock unit stacks up to a significant time (and therefore cost) saving for LU.

The lifting facility has been carefully designed to integrate with the next stage of the project. Bogie turntables are already built into the floor, so that when a bogie is removed it can be turned perpendicularly to go through into the new storage facility (through what is currently a flat wall).

With any major project such as this, many challenges must be overcome. At Neasden, the main one has been keeping the depot operational while the £240m upgrade work takes place.

A-Stock trains that were still in service (the last one was withdrawn in September 2012) and the new S-Stock units both needed maintaining at the depot while the upgrade was ongoing.

Neasden also provides stabling for 23 Jubilee Line trains, and LU was determined to retain its stabling commitments for these trains throughout the upgrade.

And the basics need to be considered as well - the canteen facilities, car parking and walkways for the staff have all been kept operational.

All of this work creates a serious amount of spoil, and removal of the material from where the new facilities are based at the south end of the site proved a big logistical challenge (ultimately, 90% of it was recycled or reused).

The main entrance to the site is the West Drive, which is in constant use operationally. A 16-metre bailey bridge was therefore installed to provide road access to the nearby North Circular. LU has estimated that in terms of logistics, this saved three or four months on the project.

When the upgrade of the depot is complete, the goal is to be able to perform all the regular train exams in one building, rather than having to move trains around the site. By minimising the movements around the site, more time can be saved.

As this issue of RAIL went to press, Neasden was responsible for maintaining all 58 ‘S8s’, as well as a number of ‘S7s’ as a temporary measure, while the facilities for maintaining the latter at Ealing Common and Upminster are being built. Phase B of the upgrade is underway.

Neasden depot, with a railway history of more than 130 years, is going from strength to strength. And with the introduction of the S-Stock, its prominent place in the Tube’s history and future is further cemented.