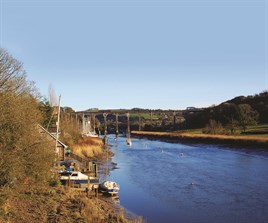 The Plymouth to Gunnislake line began as an industrial railway carrying Cornish metals and minerals from mining operations. It was part main line (though it never had any regular through workings to London), but the rest was very much a branch line.

It began as the East Cornwall Mineral Railway but, as part of the Plymouth Devonport & South Western Junction Railway, had as its engineer Colonel Holman F Stephens. Colonel Stephens was the owner and/or engineer of a rag-bag collection of light railways, among them the Hundred of Manhood & Selsey Tramway, the Kent & East Sussex Railway and the Shropshire and Montgomeryshire Light Railway. The Colonel liked grand names, though only the names were grand!

His enterprise on the Devon/Cornwall border built its line exactly as in its name, eventually connecting with the London & South Western Railway to provide a through route from Plymouth to Waterloo, worked throughout by the LSWR. The PDSWJR, however, operated its own branch line from Bere Alston over the old ECMR route through Gunnislake to Callington.

This countryside of steep hills and deep valleys was not good railway building country. From its start in Plymouth the PDSWJR route had a lengthy climb at 1 in 73, giving the LSWR a main line route from a standing start at Plymouth that was more gruelling than Shap!

After diverging at Bere Alston the former ECMR route twisted its way to Calstock, where a 720ft long, 120ft high viaduct was necessary to cross the Tamar. From there the line wound its way to Callington, although the terminus was actually in the neighbouring village of Kelly Bray, originally the terminus of the 3ft 6in gauge ECMR.

Based on traffic receipts alone, such a line could scarcely have escaped Beeching, but there was a reluctance to withdraw services from the Tamar viaduct, so conveniently placed is it. Even today, the choice of Tamar crossings on the lower stretch of the river is between the road and rail crossings at Saltash, a narrow, single-file bridge at Gunnislake on the A390 Callington-Tavistock Road, and the rail crossing at Calstock. There simply is nothing else.

However, it was only the river crossing that was saved, the Callington end of the line being closed beyond Gunnislake, the first stop on the Cornish side of the viaduct. Thus the bucolic ECMR stations at Latchley and Luckett went, along with the curious wooden station at Callington. The latter is now a factory estate; the former are private houses.

So the rail service survived to protect the viaduct. In the days following the end of steam (LSWR Class O2 0-4-4Ts, then Ivatt ‘2MT’ 2-6-2Ts) the service was maintained by DMUs, usually Classes 121, 116 or 117 (three-car sets reduced to two power cars to cope with the gradients).

Until 1979, the classic Col. Stephens corrugated iron and timber station at Gunnislake also survived (a match for some on the Kent & East Sussex) but I knew as I pitched up at Gunnislake one June morning that I’d find it a bit changed. In truth, I didn’t recognise the place - the whole station has been moved from the other side of the road to allow removal of a bridge with a severe height restriction.

Instead of the quaint and ramshackle, Gunnislake boasts a smart little unstaffed halt with a shelter and parking for about 30 cars. Parking is free and I found myself wondering if anyone commutes from here into Plymouth. If not, it probably has more to do with the poor position of Plymouth (used to be North Road) station in relation to the city centre, than any shortcomings of the branch. Certainly there’s quite a busy little community around Gunnislake station, while Calstock is a tourist’s delight with whitewashed cottages tumbling down the valley side to a beautiful stretch of the Tamar.

This is a ‘proper’ branch line, not a main line that’s fallen on hard times. Bang on time a refurbished FGW Class 153 appears round the ‘blind corner’ at the end of the platform. This lack of a view up the line is typical of the ECMR section of the line. I once read that you can seldom see more than two track lengths ahead.

It is notable that one of the features of the old-style branch line has disappeared. The oft-quoted ‘leisurely’ nature of branch services is no more. The timetable and the tight diagramming of units does not allow lengthy turn-rounds, never mind any ‘Titfield’-style stops along the way. At Tetbury in 1964, I recall the crew nipped off in their railbus to take lunch at a pub a mile up the line. It fitted in with the long layover at Tetbury and no one minded. Today, a ‘hydraulic lunch’ would be illegal.

Today’s operation, even in these rural backwaters, is slick and professional. Turn-rounds at the terminus are only a couple of minutes, and at Gunnislake 153369 is quickly on its way, about half full. Winding, sharp curves are evident from the start and as we pause for an open crossing near Calstock, I note that the road sign pointing to the station actually points away from the railway. A slow, squealing run through a deep cutting, on a continuous right-hand curve, brings us over another very minor road and into Calstock station, demonstrating graphically just how curvaceous this railway is. Checking the map reveals that the line does indeed turn through 180 degrees in one continuous curve.

Calstock station was a classic Col Stephens structure, with a small corrugated iron and timber building. The only clue to its origins now is the platform with its brick front wall and no overhang. The smart little brick shelter with its three columns supporting a wooden-valanced canopy is a recent development (which I shall find on all the Cornish branches) and replaced a concrete bus shelter.

Setting out from the station, the train is immediately on the single track viaduct, built of more than 11,000 locally manufactured concrete blocks. From 120ft above the river, the views are breathtaking either side of the train - the speed is slow, so they can be appreciated. A steep climb takes us away from the viaduct, so steep that my notebook says: “I’ve never heard a ‘153’ work this hard!” It is 1-in-40 and the climb is noticeable as the former main line converges from the right and above.

At Bere Alston the station building is a private house. But all the other main buildings still exist and the signalbox, though disused, has been recently painted. Here the conductor alights, collects the token from the driver, and unlocks the two-lever groundframe at the platform end. With the turnout set for the Plymouth line, the token is returned to the cab and we set off, running downhill on the old main line formation. Speed is now much greater than the 25mph maximum on the old ECMR route.

Bere Ferrers station boasts a private railway museum with a collection of signs and even coaches and wagons. The concrete blast walls of some MoD munitions sidings are passed, before the stop at St Budeaux Victoria Road to drop the single line token and join the erstwhile GWR main line into Plymouth.

The remainder of the journey provides a view of the Naval dockyard at Devonport but is otherwise through the docks hinterland of Plymouth, with stops at Keyham, Dockyard and Devonport before arrival in a bay platform at Plymouth. From here it’s a bus or taxi journey to the city centre. I go looking for a cash machine, decide that I can’t kill two hours at Plymouth and return to the platform.

I’m reminded of a childhood trainspotting visit to North Road and the lack of action, which was such a disappointment a few days after a visit to Exeter St Davids.

A fitter is checking the coolant in 153369. The 1045 to Gunnislake is the same unit that I came up on, but many of the branch trains are through workings from the west, from Liskeard or even Penzance. The fitter travels with us and we have a new crew, with a lady conductor (FGW seems to employ a large number of women, at least in the west). The return trip is uneventful and once back at Gunnislake I set off by car to visit some of the intermediate stations.

At Bere Alston, mid-afternoon, I encounter a young man who spots me looking at the timetable and asks: “Can you understand these things?”

He’d been sent home from work, sick, and his friends weren’t answering their mobiles, so he couldn’t organise a lift home to Totnes and was trying to get there by train. He was in the long gap between afternoon trains, and would need to wait till just after 4pm.

I left and went to Bere Ferrers, where a waiting passenger was using the ‘help’ button on the platform, as the down train had not arrived. An automated message reported it 17 minutes late due to a failure.

In fact, it was 30 minutes late, a ‘150’ had replaced the ‘153’, and when I got back to Bere Alston the young man was now, as he put it “well confused”. It was now past 1605 and the only train that had come was going the wrong way. He pressed the help button and the recorded message told him the next train would be the 1750 to Liskeard. There was no mention that the late-running 1605 was still due, or that it would call at Plymouth.

The effect of this was profound. Now, as far as he was concerned, his expected train had failed to arrive and the next train was an hour and a half away, and didn’t go where he wanted to go! You and I know that the Liskeard train would have to go to Plymouth first, but it is a mistake to assume that every passenger knows or understands the railway map. Another passenger who had arrived on the platform was similarly confused. The ‘Help’ button had not helped at all. It had, in fact, made a difficult situation worse.

Standing with these passengers, caught in a situation - albeit a minor disruption to the service - makes one realise just how useful and important these branch line links are to the local population, and how easy it is to confuse people who are not regular or frequent users of the train.

The late-running train duly arrived, the two passengers boarded and I was left wondering how the young lady conductor was going to deal with a now belligerent young man who had spent the best part of three hours feeling unwell and waiting in sweltering heat on a station platform. I was OK. I had my car, but I could appreciate the sense of isolation felt by those who were miles from home and reliant on a train which didn’t come.

I’d felt that way once, when, as a teenager, I’d arrived back at West Drayton, to find that all the evening trains down the Staines branch had been withdrawn in one of those Beeching cut-backs that preceded total closure. At least when I phoned for a lift, I got through!

Profit margins on FirstGroup’s rail operations increased in 2015-16 to 5.6%, but revenues fell significantly with the loss of two franchises.