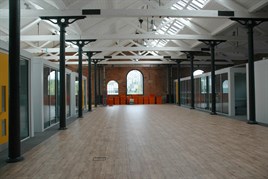 While all around it the new Pride Park estate was growing, one of the centrepieces of Derby’s heritage, its locomotive works, was falling apart.

By 2000 the site had all but closed, and had fallen into disrepair. Some of the buildings had not been used for more than 20 years, and a combination of vandals and nature had taken over.

But today, while the railway will never serve the site again, the old site has been preserved and its heritage lovingly restored.

What would once have been a dark and busy building has been transformed into a vibrant facility ready to be used by, perhaps, the next generation of railway workers.

At the start of September the first of 2,500 students will move into the site, which has been redeveloped as the main campus for Derby College. But the site’s history has not been lost. The roundhouse, locomotive works, boiler house and carriage shop have been retained, and these have been renovated to house classrooms for the students.

The work is the culmination of more than six years’ work and planning, though the main contract wasn’t signed until September 2007.

“It is an honour to work here,” says Mike Atkinson, contracts manager for Bowmer and Kirland, which built the facility.

“Derby has a rich railway heritage, and the building is fascinating. I love it. I had seen it from the outside, but never came in. Even when it was dilapidated I remember standing here and thinking ‘if engineering students cannot be inspired by these surroundings, they never will’. It is really interesting.”

Interesting, but also challenging. “The first thing that needed doing was to ensure it was structurally safe,” said Atkinson.

The enabling work started in February and March 2007 and involved securing the safety of the building. The buildings are Grade 2* listed, which means that nothing can be altered or removed without permission. In the roundhouse this meant that a ceiling could not be installed which would have hidden the wooden beams in the roof, as well as the crane over the turntable.

The roof is historically important and dates from 1839. It was designed by Robert Stephenson, and had to be restored before the college could move in. While the restoration did not need to use original materials, a decision was made to source the original materials where possible. There was the added obstacle that trees had started growing in the roundhouse, which had become overgrown since being abandoned.

Ian Harris, a director for architect Maber, says English Heritage had to be consulted throughout the process, and that the architects and builders were given the choice of whether or not to retain the rails and the turntable.

In the adjacent carriage shed, English Heritage said the cranes could be removed. The turntable is operational - Harris admits it is unlikely it will be used, although he does not rule out a locomotive standing on it once again.

Every second spur has been fitted with air circulation system equipment, but to do this the builders had to remove all the debris that had been dumped in the pits. “They were filled in with wood and bricks,” says Atkinson.

One has been glazed over, allowing people to view what is below. But this was tricky. The structural engineers had trouble restoring the roundhouse, as they did not know what was in the pits. As well as debris there was also water, and this all had to be removed before work could start on restoring the roof.

Also, the engineers could only work on the pit from above, which meant no scaffolding that was needed for the roof could be erected. “The roof was the critical part,” says Atkinson.

Once the pits were prepared, attention turned to the roof. The original timber was constructed using European Redwood, and to replicate this Russian timber was imported. But this was not done until every original piece had been examined. This allowed the contractors to determine the age of the timbers, their condition and what loads they could bear. The roof was deemed unsafe, as according to Atkinson too much weight had been put on it. It has now been restored and retiled.

Derby City Council owned the site since the late 1990s, having acquired it from British Rail. It had been earmarked as a possible home for the millennium celebrations, with the roundhouse forming the centrepiece of the celebrations. Some £500,000 was spent to stabilise the buildings before the site was sold for a nominal sum of £1. Derby College, Learning Skills Council, East Midlands Development Agency and Heritage Lottery Fund provided the funding for the renovation.

Two new buildings have been constructed, and Harris says this was done because “you cannot replicate age”. He says the restoration of the current buildings was done sympathetically, but specialist skills were required for some of the renovation. Sub-contractors who worked on the transformation of St Pancras’ were also employed on this.

“The biggest challenge has been the unknowns,” said Atkinson. “Even after the timber study we found things. We found a handwritten memo from Matthew Kirtley (the first superintendent at the site). And, strangely, somebody left the original clock-winding handle with security. It dates from 1839. They did not say who they were, they just left it.” The clock is still in place, although it is now controlled by GPS.

The trains may have gone, but the legacy of the railway lives on in Derby Locomotive Works.

Bombardier returns to work at Derby, Crewe and Ilford

Bombardier finally unveils the first Class 701 for SWR, but it won't enter traffic next month as planned.