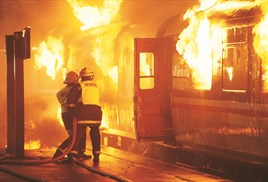 You are reading a magazine that nearly didn’t happen. In 1981 the concept of Rail Enthusiast was initially rejected by EMAP when proposed by Peter Kelly, who at the time was editor of Steam Railway.

So convinced was Kelly that a market existed for the modern enthusiast that he worked for free for three months to produce the first edition, which was published in May that year. The circulation, to the astonishment of the powers-that-be, soon reached 30,000. Initially published every two months, it soon became monthly.

What made RAIL stand out was the freshness of the news, and the fact that it wasn’t quite as po-faced as its contemporaries.

After only a few issues, Kelly had to make the choice between continuing to edit Steam Railway or RAIL.

He chose RAIL… and the magazine went from strength to strength.

By RAIL 100, the word ‘Enthusiast’ had disappeared from the title. Brown had noted: “It was sad to hear comments from BR to the effect that it was difficult to take a magazine seriously with a name like Rail Enthusiast, because the latter word conjured connotations of nuisance, headcase and such like.”

The issue also highlighted the important role RAIL has played in preservation. Rolling stock that RAIL has been directly responsible for saving include 40145, Class 01 D2956, the Wickham DMU set, Class 15 D8233, several Class 25s, and all but one of the Class 27s. They involved the co-operation of various BR engineers.

But what else was happening in RAIL 100?

The first Class 60 (60001 Steadfast) was pictured outside Brush Traction, Loughborough, where it was built.

And plans to electrify to Bradford (which eventually happened) were published. Class 91s had already started serving the city’s Forster Square station, but they had been hauled.

The first Class 322 was also rolled out, ahead of the planned introduction of electrified trains to Stansted Airport. Today the ‘322s’ work in the Leeds area, having led a nomadic existence, while Stansted services are operated by Class 379s that were delivered last year.

RAIL 100 also had an image of 90002 at Manningtree - the first time a Class 90 had run on the Great Eastern Main Line. Today they haul all the Norwich-London expresses, as well as many container trains bound for Felixstowe.

Elsewhere the issue suggested that the railway was three years from re-opening the Robin Hood line to Mansfield (it duly opened a few years later), while reporter Steve Knight, now a senior member of Virgin Trains’ communications team, travelled on the test run of Metro-Cammell’s 100th Super Sprinter, 156500. Knight also produced an eight-page feature looking at the Provincial sector, and how it was growing with a modern DMU fleet.

Featuring a shot of 47200 poking out of its Tinsley depot at 2200 on April 20 1993, RAIL 200’s cover highlighted that Class 50s were banned from the Mid-Hants Railway, and that London Underground would provide a lifeline for the then struggling RFS workshops. Brown was still the editor.

Inside, privatisation was on the horizon. A news story reported that Government had asked British Rail to set up three rolling stock companies that would take over responsibility for rolling stock. They are still in place today (Angel Trains, Eversholt Rail and Porterbrook), while others have since started operating, including Beacon Rail.

Fears about the looming sale of the railways were also raised as part of a story that the Commons Transport Select Committee would publish its final report into plans on August 27 1993. Today, the TSC considers RAIL an influential industry voice, with current Managing Editor Nigel Harris asked to give evidence to MPs on June 26 2012 about government’s rail plans.

Elsewhere, work was about to start on construction of the Jubilee Line Extension, and Eurostar’s North Pole depot was preparing to take delivery of its first Class 373.

And having been reported 100 issues earlier that it was hoped to open the Robin Hood line in 1992, the line finally opened on May 17 1993, with Knight there to record it for RAIL.

RAIL 699 reported that 50027 Lion has returned to the Mid-Hants Railway after a 17-year stint at the North Yorkshire Moors Railway. RAIL 200, however, reported that two ‘50s’ (including Lion) had been evicted due to “horrendous breaches of discipline”.

Lion had failed an inspection, and was barred from working at the MHR’s April diesel gala, while the owners claimed that technical advice being given was “unacceptable”.

Also in the preservation world, pioneer Class 47 (47401) was saved, although its owners only discovered this when asked by the Director of Procurement to move it from Immingham, where it had been stored!

On the main line, the final Class 101 heritage DMUs left East Anglia, which meant that all Regional Railways trains in the area would now be operated by Sprinters.

And RAIL 200 carried pictures of the first Class 166 Turbo to work on the Berks and Hants line, as well as performance testing of new Hunslet EMU 323201.

Meanwhile All Change (now Stock Changes), revealed that Class 37s were being transferred to Bristol Bath Road and Cardiff Canton (both now closed), while ‘47s’ were being moved from Old Oak Common to Stratford (also both now closed).

With current Managing Editor and Events Director Nigel Harris now at the helm, and with a staff that included Knight as well as two writers who would go on to become editors elsewhere, the magazine was developing a wider audience - more emphasis was on policy, although essential matters for the hobbyist were still covered.

The cover carried a hard-hitting investigation looking at the shocking state of the main line near Teignmouth, which included the use of 18 screw-fitted tie bars (three times more than was advisable, an expert from the Permanent Way Institution told RAIL).

Also in RAIL 300, Sea Containers President James Sherwood, whose company GNER ran the East Coast Main Line services at the time, said: “Two stretches of the route have been identified as suitable for 140mph running and some is already signalled for 140mph.”

When asked about the project’s timescale, GNER Chief Executive Christopher Garnett told RAIL: “If Railtrack comes up with a system that will allow us to do 140mph we would run at that tomorrow.”

This would have used Class 91s, but Railtrack didn’t seem to share GNER’s enthusiasm, and warned of a number of issues that needed to be addressed, including cab signalling and other modifications. The project never happened.

National Express ordered a fleet of new 38 three-car electric multiple units for its ScotRail franchise, although they didn’t enter traffic until April 2001 because of various faults.

Eventually two more trains were added to the order, and they were designated Class 334s. They are still in use today.

Another new train order, worth £200 million, was also announced, with LTS Rail (now c2c) looking for 44 four-car EMUs. This deal went to Adtranz (now Bombardier), and was followed by another order for 28 trains. However, problems with the delivery saw two more delivered free. They finally all entered traffic in 2002.

The last of the train operating companies to pass to the private sector, they are now London Overground, Northern Rail (both NWRR and RRNE) and First Capital Connect, while CT was disbanded.

In Open Access, letters were being written about EWS buying Class 66s from General Motors, and how people needed to stop thinking “British is always best”.

And there were pictures of a spectacular explosion at the Nene Valley Railway. But thankfully it was all make-believe - the magazine was reporting on filming for the TV series London’s Burning, which saw two coaches ignited.

And by RAIL 300, readers were being treated to the views of two now long-standing RAIL columnists - Industry Insider and Wolmar.

The early weeks of 2001 saw RAIL 400 carrying a cover story that the regulator had hit Railtrack with an enforcement order, relating to a national recovery plan for performance.

Elsewhere the opening of the remodelled Leeds station was delayed by snow, while Alstom had just completed the sale of 139 Nightstar vehicles to VIA Rail. They are now used to operate luxury trains across Canada (RAIL 699).

RAIL 400 also carried the findings from the Health and Safety Executive’s final technical report into the Ladbroke Grove disaster, which had killed 31 people in October 1999.

It highlighted that the driver of the Thames Trains Turbo received and acknowledged an Automatic Warning System (AWS) warning as he approached signal SN109 at danger. The direct cause of the crash was the Turbo passing SN109 at danger and colliding with a First Great Western High Speed Train at a closing speed of 130mph.

Howard Johnston, who has written for every edition of RAIL, recollected a warning from BR Chairman Sir Peter Parker that had been used in the first edition in May 1981, that the 11,000-mile network was on the verge of collapse because of a lack of investment. Johnston suggested that modern-day managers should heed that warning.

Rail Passengers Council National Director (and now Passenger Focus Chief Executive) Anthony Smith wrote that the RPC believed the industry had collectively failed its customers, and that the accident at Hatfield (only a few months earlier), had revealed the depth of the problems facing the industry. “The rail network needs to be re-anchored on a firm basis of public responsibility and accountability,” he said.

In Fleet News, RAIL reported that the planned termination of Class 37/4s on the North Wales coast had once again failed to materialise, with not enough Class 175s ready to replace them.

It would be 2006 before Arriva Trains Wales could finally dispense with locomotive-hauled coaching stock on the coast.

Also to celebrate the milestone, EWS agreed to renumber our ‘adopted’ locomotive 60016 RAIL Magazine as 60500.

Today the locomotive has been denamed and stands forlornly at Toton, where it has been stored for four years.

Inside RAIL 500, it was revealed that Hitachi expected to sign a deal for what was to become the Class 395 high-speed units that entered traffic five years later.

Meanwhile, consultancy Atkins warned the Department for Transport that unless a high-speed line was built, Britain’s rail network would suffer “substantial overcrowding”. Seven and a half years later those same warnings are being issued - while HS2 has been given the green light, it has still to pass through Parliament for formal approval.

Grand Central appeared in RAIL 500 with plans to run between London King’s Cross and Sunderland, after initial plans to run from Newcastle to Manchester were rejected.

The first MTU engine to be fitted to a Class 43 High Speed Train power car was unveiled at Railtex. It entered traffic the following year, and now all but 25 of the remaining 195 ‘43s’ are fitted with the engines, dramatically improving the reliability and career prospects of the HST fleet.

The front cover reported on Chiltern Railways’ £200m plans for a new half-hourly Oxford-London Marylebone service. Now known as Project Evergreen 3, this should be up and running in 2014.

The Office of Rail Regulation ordered Network Rail to cut disruption by a third over the next five years. The results should be known next year.

Elsewhere, Europhoenix was in the market for Class 86s and was to buy 22 that it would start to overhaul and export.

And so to RAIL 700… and beyond. What will be the big railway developments between now and RAIL 800?

Certainly there will be developments in new trains, and maybe even HS2 will have been given the go-ahead. Whatever happens, we guarantee that you will be able to get the very best coverage only in RAIL.