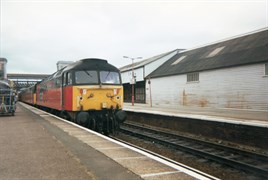 Introducing a variation on the push-pull system used by British Rail on passenger trains enabled Rail Express Systems to save money on its parcels operations.

It was also intended that push-pull operations would help with the planned opening of a large terminal at Willesden in 1996. This would see the end of parcels traffic at London termini, as Royal Mail looked to centre its operations in one location.

On September 1 1993, Rail Express Systems (RES) unveiled 94300 and 94301 to the press. They were classified as NAA vehicles, but were known as PCVs (Propelled Control Vehicles).

Despite having a cab, they were not seen as a parcels version of a Driving Van Trailer (DVT) or Driving Brake Standard Open (DBSO). Instead they were designed to be a means of releasing a train from a siding or buffer stop without the need to provide a second locomotive.

Forty-four were planned, with 42 eventually converted. All had previously been Class 307 BDTBSO or DTCOL (Driving Trailer Open Composite Lavatory) vehicles, and dated from 1954-1956 (see panel).

They were converted with the Willesden Railnet Hub in mind, as they were used to shunt out of the hub.

It was planned that the PCVs would be marshalled at each end of a four- or five-vehicle rake of vans.

RAIL 209 (September 1993) claimed: “It is RES’ intention that the trainsets retain a fixed formation, but this is dependent upon operating and maintenance requirements.”

It further stated that they were intended to run with either TPO (Travelling Post Office) or NKA (High Security General Utility Van) stock. In actuality, the PCVs were marshalled either end of two GUV coaches.

The PCVs were fitted with a normal set of driving controls, albeit with the reverse position of the power controller blanked off. The EP brake unit was replaced by a type used on Class 47s, while the Driver Safety Device (DSD) operation was transferred from the power controller, which was ‘locked down’, to a foot pedal (the normal locomotive practice).

Two drivers were required to operate a train using PCVs when it was propelling. The locomotive driver would set up his controls as normal, but would leave the driver’s brake valve in a shut down position. The locomotive’s AWS (Automatic Warning System) equipment was then set, and the DSD remained ‘live’.

Meanwhile, a second driver in the PCV would set the controls by inserting the driver’s key to unlock the Master Controller. The AWS was then set, and the two drivers would then communicate via the Driver-Guard communication to ensure the equipment was functioning properly.

Once that was complete, the Master Controller on the PCV was moved into the forward position - this registered via a red light in the locomotive.

The PCVs were capable of being hauled at up to 100mph, but maximum propelling speed was just 40mph. Once underway, when propelling, all the power demand and braking was under the control of the PCV driver.

Conversion work on the first two PCVs was carried out by BR’s technical services division at the Engineering Development Unit at Derby. The rest of the conversions were carried out by Hunslet-Barclay at Kilmarnock.

Externally, the vehicles had their doors and windows plated over, and two roller doors fitted. At the inner, non-driving end, shock absorbing ‘conventional’ buffer gear was fitted - this allowed PCVs to be coupled to other parcel coaches.

The cab ends also saw some plating over, with the headcode and destination panels effectively removed. They were fitted with ‘Sprinter’-style headlight/tail light units, and with low-level jumper cables, RCH jumper cables, battery boxes and ETH jumpers. RCH was the method of push-pull equipment used on the trains.

The interiors were completely gutted, while additional bodyside members were fitted to create extra bodyshell strength (necessary after the door pillars had been removed).

Initial testing used RES 47704, which was the first modified to work with PCVs. It was chosen because it already had jumper cables, was in RES livery, and was capable of 100mph (it had been one of 17 Class 47s converted for 100mph running on push-pull trains between Edinburgh and Glasgow).

At the time, RES had a large fleet of Class 47s, and 72 were selected to be modified and fitted with RCH jumpers. They were to be renumbered in the 47721-47793 range, although not all of the conversions and renumberings were carried out (47634/635/
640 all received the cables, but not their new numbers). Class 86s and 90s were also selected to work with the PCVs.

Some of the locomotives had been withdrawn (including 47541/579/585), and needed significant work to enable them to return to traffic. Others had been converted from Class 47/8s deemed redundant by the InterCity sector. Class 47/6s displaced from Sleeper duties in Scotland were also selected for conversion.

The first renumberings were not fitted with RCH jumper cables until the following year. Indeed, initially many ‘47/7s’ were simply renumbered without the external work.

To provide the trains, 54 Class 47/7s were needed. RES identified that 37 needed major repairs above and beyond the usual component exchange maintenance (CEM), and the Royal Mail agreed to fund 16 of these ‘Super CEMs’ at £444,000 per locomotive.

The PCVs entered traffic in the summer of 1995, and remained in use until EWS lost the mail contract in June 2003. The trains ended later that year.

They could be seen throughout the UK, often in their four-vehicle formations coupled to other rakes of parcel vans. From early 2000, brand new 125mph Class 67s had been introduced onto parcels trains, and these also worked with the PCVs.

In 2005, EWS sought to re-organise its parcel stock fleet, then redundant, with the aim of using it on high-speed freight trains. This never materialised, and it is now very unlikely that the PCVs will ever return to traffic.

Nevertheless, these vehicles proved a valuable tool as RES and later EWS looked to revolutionise a traditional railway market.