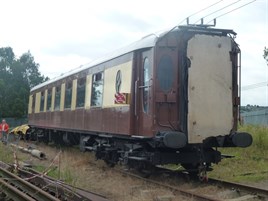 In the years since the end of steam, railway preservation has tackled some daunting projects.

Two that spring to mind are the restoration from cylinder-less scrap condition to working order of unique Caprotti valve-gear BR ‘8P’ 4-6-2 71000 Duke of Gloucester, and the construction of the completely new ‘A1’ 4-6-2 60163 Tornado. Both these hugely ambitious projects were carried out with a view to main line operation, and both have been successfully operated on the Network Rail system.

Preservationists are nothing if not ambitious, and a project that is pushing the boundaries back even further has now been in progress for the past two years - the Brighton Belle Project, which aims to bring one of the 1930s-built Pullman electric multiple units (EMUs) back into main line operation.

Electric traction has always been the Cinderella of railway preservation, largely because there’s nowhere to run it except the national network. But a surprising amount of EMU stock has escaped the scrapman, existing in various degrees of preservation and in some unlikely locations, well away from any electrified track.

The groups that own such stock face three possible options if their trains are ever to run again under their own power:

To design and build a self-contained power unit, such as a battery or generator car, to enable use on a non-electrified railway.

To await (or promote) the creation of an electrified heritage railway.

To meet the standards of re-engineering necessary for gaining approval to run on the national network.

Such are the problems associated with the first two of these options that the third alternative actually becomes the least daunting - and that is the view taken by the 5-BEL Project. This is not a preservation whim by a few superannuated railfans who couldn’t bear to see an old train die, it is a genuine commercial proposition based around running a historic EMU on the 21st century railway network.

The ‘Belle’ was withdrawn by BR in 1972 as part of the elimination of Pullman services, and following adverse comparison between the 40-year-old Pullmans and the then-new 4-CIG units. It has now been out of service for more years than it was in service!

The Pullman cars were scattered to the four winds, ending up anywhere from Swanage (Dorset) to Keith (Banffshire). Several were attached to pubs as restaurants, while others eventually passed to the VSOE and were restored as locomotive-hauled stock. The latter have been the only ‘Belle’ cars to see any frequent use in recent years - the rest have been ‘resting’ (and rusting) for nearly 40 years.

While we have preserved (and new-build) steam in almost daily action on the national network, frequent sorties by heritage diesel traction, and regular use of re-engineered diesels in front-line railway service, rarely since privatisation has a preserved EMU ventured onto the national network.

Against that backdrop the Transport Trust promoted the 5-BEL Project, forming a separate group that set out to bring together a number of ‘Belle’ cars, with a view to re-forming a unit (or part-unit) and restoring it to its former glory.

The group moved quickly to acquire three cars, two motor coaches and a trailer parlour third, with a view to their use with a Class 73 for power. That idea quickly developed to become a five-car unit, restored to run on the main line network and - when running on the former SR third-rail system - to work under its own power.

Introduced by the London, Brighton & South Coast Railway as the ‘Southern Belle’, the London-Brighton Pullman service was transformed in 1933 with the electrification of the Brighton line.

Three five-car Pullman EMUs were acquired, the only electric Pullmans ever built. They were ground-breaking in their construction and technology, the internal blend of traditional woodwork with art deco styling masking some state-of-the-art features such as the all-steel monocoque construction. The service was renamed ‘Brighton Belle’ in 1934, with two sets running at peak times as a ten-car train and the third kept in reserve.

The service was suspended during the Second World War, and one of the three sets was severely damaged in a bombing raid. It was reintroduced in 1946, becoming popular with celebrities and theatrical stars, many of whom used it to commute from Brighton to London.

The three sets were refurbished during the 1960s, receiving new bogies in an attempt to overcome poor riding. Outwardly, they received little change other than roller blind indicators and the later-style Pullman coat of arms.

Poor ride quality continued to be a problem, as it was on most of the older SR electric stock, and the ‘Belle’ was withdrawn in 1972. All 15 cars survived in preservation - some as static restaurants, others after storage at Manningtree. Several are now in running order as locomotive-hauled stock, including examples in the British ‘VSOE’ train. One driving car was destroyed by fire.

What had begun as a tentative restoration project - with a view to taking the ‘easier option’ and using the restored ‘Belle’, locomotive-hauled, on 25mph heritage railways - soon adopted much higher goals. Taking the ‘Belle’ out on the main line would mean re-engineering the 70-year-old train to meet 21st century requirements. And such requirements are not negotiable.

Nearly 40 years of inactivity has not done the ‘Brighton Belle’ Pullmans any favours. At best, those cars that have found an interim use as restaurants or on preserved railways have suffered botched modifications to suit their new use. At worst, stored cars have simply mouldered and rusted.

I was shown one car, from a preserved railway, where a door had been widened by lopping a chunk off one side of a marquetry panel, so that the motif is no longer central. In the same car, all trace of the guard’s seat, periscope and cab interior fittings had been removed. This, in a vehicle acquired by a ‘preservation’ society.

Another, long attached to a pub, had rusted until the metalwork above the windows looked like dark brown lace. The white ‘Lincrusta’ ceilings had been disfigured with modern plastic extractor fans.

It may, however, be a good thing that these Pullmans have reached such a low point, as from here things can only get better.

The kitchen first car Doris, preserved at the Bluebell Railway, is in a much more presentable state, although it will still need to be stripped to enable metalwork examination and testing as well as insulation stripping to take place.

One undoubted Godsend is the complete lack of asbestos. Floors in the ‘Belle’ were sound-insulated with cork, and ceilings with a compressed fibre material. It all has to be replaced with modern materials, but at least the removal is not hazardous.

If customers of the new ‘Brighton Belle’ are to keep coming back for more, they need to be satisfied with the level of comfort.

With equipment approaching 80 years old, it is no surprise that spares are impossible to obtain, and that major components such as traction motors have been superceded by much better designs. Accordingly, the ‘Belle’ cars are being re-engineered using parts of a 4-CIG unit including bogies, traction motors and other control equipment.

This is not just a case of a simple bogie swap. The 4-CIG employed BR5 trailer bogies and BR6 motor bogies, which have an entirely different method of mounting from that of the original ‘Belle’ cars. The latter have side buffers and screw couplings with some forces transferred through the solebars, while on the 4-CIG all buffing and traction forces are taken through the buck-eye coupling and underframe (see panel).

Change the bogies and you then have to change the couplings to buck-eyes. And that, in turn, makes the side buffers redundant, brings the cars closer together, and may even mean that the intermediate buffers have to be removed.

Although purists might baulk at the degree of mechanical alteration required to fit the ‘Belle’ for 21st century operation, there should be little cause for concern about the interior.

The renovation of the cars will include a return to their original 1930s ambience, much of which was undone by BR in 1950s/60s refits. The elegant woodwork and marquetry panels will be restored or renewed, and all metal fittings such as luggage racks will be replated. The original anodised finish on these has been worn away to reveal the underlying brass.

The original 2+1 seating layout will be restored, but because today’s passengers are generally broader in the beam than those of the 1930s, the traditional Pullman armchairs will be slightly wider.

This is made possible by the fitting of a modern heating system that dispenses with the intrusive and uncomfortable ducting along the lower side walls of the cars. Where possible, original fittings will be re-used. And the Project has even obtained one of the unique ‘two-faced’ clocks that were a feature of the mid-saloon bulkheads.

To date, three of the cars have received structural and platework repairs at Rampart, Derby, with the remainder to follow. The cars then go to Barrow Hill for the bogie conversion work, and the first of these is now under way.

The complete project is expected to take
four years and cost £1.75 million. Once completed, it will show the way forward for other, perhaps less ambitious, electric unit restorations.

A look back to plans for deployment of modified locomotives across former Southern Region to retrieve stricken electric multiple units. RICHARD CLINNICK reports