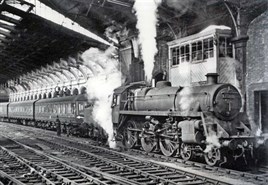 Bristol Temple Meads was one of Isambard Kingdom Brunel’s original broad gauge termini, and has been an icon of railway architecture ever since it was built for the Great Western Railway in 1840.

But that’s not what Network Rail will be restoring in Bristol, at least not for now. Instead, NR will be working on the rest of the station, including a part of it you may not know even existed.

Hidden away in plain sight in the station car park is the once bustling heart of Bristol Temple Meads station. The Midland and GWR extension designed by Brunel’s associate Sir Matthew Digby Wyatt was built between 1871 and 1878 to extend Brunel’s original. It is now due to be renovated and re-opened as part of the flagship Intercity Express Programme (IEP) and the Department for Transport’s High Level Output Specification.

It is the long pink stone building you see on your left as you walk up to the station main entrance, and is currently being used as a car park. A lot of people think it’s part of Brunel’s building, which is a testament to how sympathetically Digby Wyatt designed it. Among the unique original features in the 1878 shed is the old signalbox, a little wooden structure jutting from the wall at the south end of the shed.

The train shed held Platforms 12 to 15 after Temple Meads was expanded in the 1930s. The station had been extended from nine to 15 platforms by the GWR, using government loans. This gave us the station we know today, but rendered the old Victorian terminus defunct.

The last trains to run into it were local Western Region services to and from Bath Green Park, diesel multiple unit services to Severn Beach, and long-distance steam services from the North.

By the 1950s, locomotives and trains from other BR regions, particularly the London Midland, had started to appear quite frequently. Britain’s oldest provincial terminus was shut on September 12 1965, and left for several years before the Brunel station was turned into a museum in 1989.

The constrained space in which the station was built means Digby Wyatt’s building offers a valuable space for the new IEP trains to use.

But it’s not just the train shed that’s being redeveloped - the whole station is being rebuilt, to increase capacity and to bring new and old features back into use. The IEP will bring electrification and high-speed trains to Temple Meads, and considering that it’s 140 years old, for it to cope it’s going to need an upgrade.

Work is now being carried out on the Grade 1 and 2 listed station, to allow for the installation of catenary equipment and the use of the 1878 shed for main line trains.

The train shed is mostly intact, as is the original Brunel train station. It’s also fairly empty, which makes things a little easier for Network Rail, although it will still have to break up the tarmac and remove several sets of railings and signposts.

One major task outside is to demolish Bristol Panel signalbox, which was built in front of the old terminus in 1970. At the time it was built it had the largest control area of any power box in the UK (114 miles).

Part of the wider work in preparing the area for electrification involves a £197 million signalling upgrade at Bristol South, including the installation of fibre optics for use with high-speed trains along the Great Western Main Line.

The former Platforms 12 and 13 are still in situ, albeit looking a little tired after half a century of neglect and car tyres. Network Rail’s plan is to provide enough space to accommodate a 260 metre-long ten-car IEP set in the shed (called the ‘Midland Shed’ in Network Rail’s Enhancements Delivery Plan). The eventual aim is for two high-speed trains to run every hour between Bristol Temple Meads, Bristol Parkway and London Paddington.

One consideration for the rebuilding will be the dozens of foundation arches under the station - the whole site is built on top of brick and stone arched cellars.

This is not expected to cause any major problems, but what could become a contentious issue is the Listing of many of the station buildings. This means that they are considered to be of national or international importance, and thus the minimum of alteration must be made to them, the view of them, their interiors and their surroundings to allow its adaption for modern railway use.

Network Rail has a responsibility to ensure that its value to the nation is kept intact, and has been consulting with English Heritage and local conservation officers to seek approval for their proposed works.

Since closure of the British Empire and Commonwealth Museum in 2008, Brunel’s building has been renamed ‘The Passenger Shed’ and is now a conference centre. Is it possible that Brunel’s original train shed will also be brought back into service?

Despite there being no officially released plans to do so, the centre is taking bookings only up to March 2017. Brunel’s name has been used a great deal to promote this project over the past couple of years, and local interest groups have greeted the idea of reusing the original building, which is currently one of Bristol City Council’s largest venues, with great enthusiasm.

With any luck, Digby Wyatt’s station will be back in full use by 2018. And who knows, maybe a pioneering broad gauge trainshed will also one day be made ready for anything that the new Great Western can throw at it.