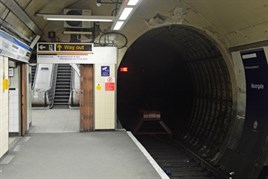 "As darkness came, there was a very loud noise, metal and glass breaking, no screams, all in the fraction of the second one takes to breathe in. It was all over in no time.”

Javier Gonzalez was speaking to the BBC, after surviving the crash that claimed more lives on the Tube than any other single incident. He spent weeks recovering from his injuries in hospital.

On February 28 1975, the 0838 Northern Line Underground train left half a minute late from Drayton Park, carrying 300 passengers to Moorgate on the Highbury branch.

As the train approached its destination at 0846, it failed to slow. Travelling at 30mph-40mph, the six-vehicle train entered the overrun tunnel at Moorgate terminus.

Fifty-six-year-old Driver Leslie Newson, carrying nearly £300 in cash ready to buy a car for his daughter, remained upright and took no action. He did not move or raise his hands to protect his face as the train crashed into the end wall of the tunnel, crushing the first, second and front-half of the third vehicle into approximately half of their original length.

Staff at Moorgate immediately called the emergency services, and the first ambulances were on the scene just eight minutes after the impact.

The station had been left in complete darkness, engulfed by dust and soot. Newson was killed, along with 42 passengers. A further 74 passengers were injured and needed treatment in hospital.

Forty years on, the site of the incident bears no mark of it. But the causes of the crash are no clearer now than they were then.

That Friday morning, on the last day of February, Motorman Newson had a normal start to his working day. He didn’t usually eat breakfast, but always made a cup of tea before work, and today was no different.

When he arrived at work at about 0610, he was in plenty of time to join his colleagues for another cup of tea before starting duty at 0624. He shared some milk from his flask with one colleague, and another asked Newson for some sugar, to which Newson told him: “Go easy with it, I shall want another cup when I come off duty.”

The other drivers didn’t know Newson well, but they generally regarded him as “conscientious” and “cheerful”. He’d been employed at London Transport since 1969 and, although he had recently transferred to Drayton Park, he was familiar with the Highbury branch. In the 13 days leading up to that Friday, he had driven 121 times onto Platform 9 (where the accident occurred) without incident.

All the usual checks were carried out - the brakes were effective, and everything was in order.

Guard Bob Harris was assigned to Newson’s train that morning (Train 272), but he was running late. So Motorman Rozario volunteered to fill in until Harris arrived. Rozario did not know Newson, but found him to be fit and normal that morning, and the train ran as expected.

Harris took over just after 0700. He was 18 and had only been in the job since the previous August, but he’d worked regularly alongside Newson since his transfer to Drayton Park that January.

The pair chatted briefly between the following three journeys. They never spoke a great deal, which Harris said he thought was because of the large age gap between them.

That morning, Harris told Newson he was going camping that night. Newson said he was mad: “I would not go camping in this weather. I loved it at Dunkirk, but I would sooner go into a hotel.”

As the train left on its fourth (and what would be its final) journey, Newson waved to a colleague on the platform at Drayton Park.

Just after the train departed Old Street, Harris left his post at the leading end of the last vehicle and entered the driving cab in search of a newspaper.

Engrossed in the advertisements, he paused at the leading double door bay on his way back, and suddenly realised that the train was approaching Moorgate too fast. No sooner had he thought it, than he was thrown to the floor.

Standing on Platform 9, Railman Andrews watched the train approaching and knew it couldn’t stop in time. He immediately decided to ring for Control from the adjacent platform, but he was already too late.

Nearby, Guard Friar stood among the 20 to 30 people waiting on the platform. As he heard the train approaching too fast, he looked round to see Newson sitting in a normal position in the cab, looking straight ahead of him. The train knocked down the red marker light, and sand blew into the air as the train hit the sand pit and ran into the overrun tunnel.

Several eyewitnesses who were interviewed later corroborated what Friar saw - that Newson did not move.

A recovery operation ensued, that was described at the inquest as being of “unprecedented difficulty”. The only journalist allowed into the tunnel (Gerard Kemp from the Daily Telegraph), described the scene as “a horrible mess of limbs and mangled iron”.

It took hundreds of police, ambulance staff, members of the Salvation Army and more than 1,300 firemen four days to retrieve everyone onboard.

Twelve hours after the collision, a young policewoman was rescued from the front carriage after her foot was amputated.

It was not until 13 hours and 19 minutes after the collision that the last survivor was rescued. And the driver’s body was finally recovered on March 4 - four days later.