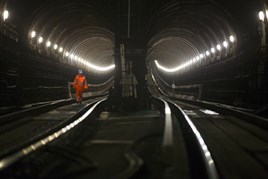 In a quiet residential district on the south bank of the Thames, hidden away from view, stands the original entrance to what was once a major tourist attraction.

The first of its kind, it was an incredible engineering masterpiece that is as important today as when it opened more than 170 years ago - although today it is for a very different reason, as it now transports 60,000 rail passengers a day underneath the River Thames.

The Thames Tunnel was probably Sir Marc Isambard Brunel’s most famous project, and was the first tunnel under a navigable river anywhere in the world.

But neither of those factors is what makes this structure so special. Rather, the methods used in its construction paved the way for the tunnel boring machines in use today - the Channel Tunnel, London Underground and Crossrail all owe their construction methods to Marc Brunel and his Thames Tunnel.

Today, 16 trains per hour transport approximately a third of all London Overground’s daily passengers through the quarter-of-a-mile tunnel from Rotherhithe to Wapping (southeast London).

The tunnel has been a vital part of the Overground since its inception in 2007, when the neglected East London Line was absorbed into the new service. And investment has continued ever since, with a £320 million capacity improvement under way to extend the Class 378s that run on the line from four-car to five-car formations, representing a 25% capacity increase.

It means that maintenance can only be carried out when the trains aren’t running.

The roof of the tunnel is only a few feet from the river water, and more than 3,000 litres of water have to be pumped out of the tunnel every day to keep it from flooding. The railway is closed every night for routine maintenance, although to upgrade the whole signalling system, as London Overground did in May 2014, the whole railway had to close for three days.

That was no doubt frustrating for the many passengers who hadn’t checked the timetable before rocking up at Rotherhithe station on a wet and miserable Saturday, only to find that there would be no trains and that they really should have remembered an umbrella.

But for a small group of people who knew why it was closed, the rain could not chase away the excitement. Because, for only the second time in 150 years, the general public was granted access to walk through the Thames Tunnel and discover the secrets of the overlooked ‘grandfather’ of tunnels.

Donning our blue plastic gloves (to prevent contamination from rat urine and faeces - a stark reminder that this is not a normal trip on the Tube), we head down into Rotherhithe station, and then down some makeshift steps to track level.