"We do not tolerate failures here" 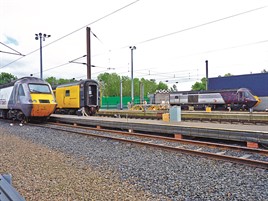 Demand for High Speed Trains is at its highest on the East Coast Main Line since the line was electrified 20 years ago. New destinations have been introduced by East Coast as part of its Eureka timetable, resulting in greater claims on the iconic HSTs.

But the end is in sight for the trains on this line, with the Intercity Express Programme trains to be introduced from 2016 allowing the withdrawal (or more likely the cascade) of HSTs from the ECML.

However, the fact that the trains are to be retired from frontline duty does not mean a swift and terminal decline. Investment is still required because the operators - in this case East Coast - want punctual trains. And punctuality comes from reliability.

For many years the HST’s Achilles’ heel was performance, resulting in the decision in the mid-2000s to fit power cars with new engines. At the time Great North Eastern Railway (GNER) operated the ECML fleet, and it opted for the successful MTU engines that had been tested initially with First Great Western (RAIL 518).

GNER also embarked upon a refurbishment plan for the HST, which had a very tired and dated interior - they were still travelling with the original interiors, albeit with different colours to when they were originally introduced. The ‘Mallard’ interior fitted to the Mk 4s was adapted and the first HST set was refurbished in March 2007, a few months after the first MTU power cars.

The refurbishment and engine programme finished in 2009, giving the operator of the ECML (then National Express but now East Coast) the tools to set about transforming performance.

In the period from March 2009 to 2010 the fleet achieved 18,000 miles per casualty. This was a massive improvement on the 8,000/9,000mpc that the HSTs recorded before they received their new engines and interiors, but EC wanted more.

These figures are even more remarkable when it is considered that the trains had to operate during some of the harshest winter conditions in their career. Trains regularly returned to their depots with damaged underframe equipment, while there was more than one instance of an HST being frozen to the track at Aberdeen Clayhills. But they carried on, and carried on reliably.

EC’s HST fleet is based at Craigentinny depot, to the east of Edinburgh adjacent to the East Coast Main Line. Nearly a century old, it was one of several selected for modifications to become an HST-specific depot in the 1970s, as part of the introduction plan for the trains. Others included Bounds Green (London) and St Philips Marsh (Bristol).

The HSTs also receive maintenance at Aberdeen Clayhills, Neville Hill (Leeds) and Bounds Green, but it is Craigentinny that does the heaviest work on the trains.

As well as the EC fleet, Craigentinny is also home to the five CrossCountry High Speed Trains and Network Rail’s New Measurement Train. While NR’s Class 43 fleet has a different exam programme to the EC fleet, the XC ‘43s’ are on the same programme.

“We offer modifications if we believe any are needed,” says EC IC125 Trains Engineer Steven Ramage. “To us, it is just a paint job, we do not look at their trains any differently from ours.” EC’s Class 91s and Mk 4s also visit the depot.

Overnight exams and maintenance are carried out each weeknight on 12 train sets - two EC HSTs, two XC HSTs, two Class 91 and Mk 4 sets, and six XC Voyagers. On a Saturday this increases to 15 or 16.

This work is carried out to a very demanding timescale, with trains arriving on site between 2030 and 0030, and departing between 0420 and 0900. And there is little room for error, because the trains are very tightly rostered. For example, EC needs 13 of its 14 sets in traffic, and XC demands four of its five HSTs are available.

Level 4 major repair exams and Level 5 heavy maintenance overhauls are undertaken at Craigentinny - previously the ‘43s’ would have been sent to major works elsewhere.

“We can do everything here,” says Ramage. “We do repaints. Only a major re-wire would require us to send it off-site. They used to be sent away, and we are proud of our fleet. We have an ownership.”

Ramage says EC is investigating pooling as much of the resources as it can at the Edinburgh depot, giving it more control over the HST fleet.

And he praises EC for investing in the maintenance facilities for the trains: “East Coast is being a lot more proactive and is more keen to invest. At the depot maintenance is now preventive.”

Work is being carried out at Craigentinny that will see maintenance of the Voyagers moved further south along the depot towards Portobello, and new access has been built there for the trains. “We need as much capacity as possible,” he says.

A Level 4 exam can last as long as five days, while the Level 5 work (which is done every 21⁄2 years) can take as long as a month for a Class 43 power car.

Eight overnight cleaning teams look after the trains, while 24 drivers and shunters move the trains around the site. A repair shed team looks after the Class 43 Level 4 examinations, while a heavy maintenance team does the Level 5 work. Another team manages the wheel lathe.

An engineering technical team scrutinises every delay minute to understand what the problem was, how to repair it, and most importantly ensure it doesn’t happen again.

A production planning team develops the long, medium and short-term plans for how the trains and depots will operate (this involves both EC and XC control), while an eight-strong facilities team and a ten-strong stores team are also based at the depot.

The Edinburgh technical team is based off site, working at stations and en route to carry out any faults that may occur in service and to diagnose whether the trains can continue running.

To further improve the HST performance, and to better understand what goes wrong, where trains are and where they are going, EC set up a Visualisation Centre at the depot in July 2010.

This room has been vital to the turnaround in performance, says Ramage. “Everything is here, everything we need. All the information is here regarding where the stock is.”

About the change in performance, Ramage is adamant: “We do not tolerate failures here.”

The Centre uses production boards on office walls, with participants standing around the boards rather than being seated at tables. This encourages everyone to contribute to the discussion, as they must write the latest output from their team on the boards.

EC says this enables the staff to focus on the issues affecting the fleet that day. A visible, interactive system promotes a spirit of togetherness, accountability and teamwork, and encourages an open exchange of information on the previous day’s performance, lessons learned, discussions about availability and the plans for the day - all of which helps performance.

Several initiatives have arisen from the creative teamwork. Service and maintenance teams had reported that inter-vehicle through-control jumper cables were causing delay minutes, often because of damage caused by snow, ice and ballast. A robust design was manufactured, and more durable inter-vehicle connections were developed to give a stronger connection.

The poor winter weather also damaged the Advanced Warning System (AWS) receiver positioned under the train. Planners, engineers and service and maintenance teams worked with Unipart Rail and created a steel braided conduit modification for the trains - this is now almost complete with no reported failures in traffic.

Another initiative involved cost savings around traction motors. Those fitted to Class 43s cost £5,000 to replace, with 23 needing to be replaced in a nine-month period last year.

A new maintenance regime was implemented following an investigation by a working group that involved Bombardier, EC’s engineering team and the operator’s service and maintenance team. Since that was introduced last September, only two traction motors have needed replacing.

But Ramage is not satisfied. “We want to keep getting better. Passengers pay a lot - so it should be on time and clean.”