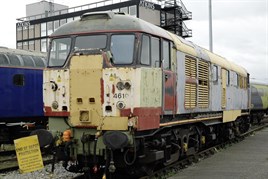 However, that is not strictly the case, because last year 29 of those locomotives were scrapped or preserved. Over the year a further 147 were stored, but 154 were reinstated - indeed, many of those reinstated had been stored earlier in the year.

Such is the case these days - many operators will store a locomotive while it undergoes repairs. Last year, 217 locomotives were stored but then reinstated within a month.

DB Schenker is the operator that does this most frequently. It will often remove members of its fleet from traffic and class them as stored if they are undergoing any form of repair, including exams and repaints. No class is immune from this, even the Class 66s and 67s.

The class with the largest number of stored locomotives is the ‘60s’, with 80 stored (only 100 were built). But of those 80 several are undergoing repairs or overhaul, so the number in storage is fluid.

DB 60098 (the 1,000th locomotive built by Brush Traction at Loughborough) has been out of traffic the longest. It was stored by EWS in May 2004, and has not returned to traffic since. It is dumped at Toton, and is unlikely to return to traffic.

The second largest number of stored locomotives from one class is 54 (Class 08s). These include many owned by smaller operators such as Harry Needle Railroad Company. Indeed, it is an HNRC locomotive (08503) that has been out of traffic the longest. It was withdrawn by BR from Holbeck depot in September 1988, and is currently stored at Goodman’s yard in Sutton Coldfield.

HNRC also owns the only Class 07 on the rolling stock register that is stored. This is 07013, which is up for sale. Withdrawn by BR in July 1977, it has been hired for industrial use by HNRC in recent years. It is being disposed of by the company (although only to preservationists), because it is deemed no longer commercially viable.

Elsewhere, five Class 09s are stored, and again HNRC owns the one that has been out of traffic the longest (09012, stored by EWS in February 2004). Despite working trains while in HNRC ownership, it has remained allocated to the company’s HNRS stored pool.

Class 20s also feature on HNRC’s books, and here again the company owns the longest stored example (20088, withdrawn by BR 21 years ago). It was subsequently used by RFS to haul Channel Tunnel construction trains, but has been out of traffic since the early 1990s. It is up for sale, and is currently at Long Marston.

Four Class 31s are stored, with 31461 (owned by Nemesis Rail) spending the longest time out of traffic. It was stored by Mainline Rail in February 1995.

It was previously owned by Fragonset Rail, and was reportedly due for a comeback with that company before it went bust. Dumped at the Battlefield Line for several years, it has been moved to Nemesis Rail’s Burton depot ahead of a return to traffic.

There are two Class 33s stored, both owned by West Coast Railway Company. Of this pair, 33030 has been out of traffic the longest, having been stored in August 2005 when it was still owned by Direct Rail Services.

Along with the other three WCRC Class 33s, it was traded to WCRC in late 2005, but has never been returned to traffic. A comeback is unlikely, although there has been some reported interest from preservationists.

Also at WCRC’s Carnforth depot is 37165, which was withdrawn by EWS in December 1999. This is the longest that any of the 37 stored Class 37s have been out of traffic, and it has a bleak future. Having once been deemed preserved, it has been picked clean of reusable components and will (it is assumed) eventually be scrapped.

Of the 22 stored Class 47s, WCRC’s 47368 has been out of traffic the longest, having been stored by EWS in April 1996 when allocated to Stratford (a depot now under the Olympic Park). The ‘47’ has never been used by WCRC, which acquired it following the demise of FM Rail. It is also unlikely to ever make a return to traffic.

Although they have enjoyed a resurgence in recent months, 28 Class 56s remain stored, with 56009 the longest out of traffic. This is owned by Brush Traction (and therefore Wabtec), and was used as a testbed during the late 1990s when EWS sent Class 56s to Loughborough for overhauls. It has since lain under a tarpaulin at the facility.

It’s back to WCRC for the longest-stored Class 57. Six of these locomotives are stored, of which WCRC owns four, although it is expected that three (57313-315) will return to traffic this year.

However, it is 57005 that has been out of traffic the longest. It was one of two used by now-defunct Advenza Freight, but when that company went bust in October 2009 it was stopped, and it has not turned a wheel since (other than being towed to Carnforth).

There are eight Class 58s stored in the UK, all of them owned by DB Schenker. 58017 has been out of traffic the longest, having been stored by EWS (which DB bought in 2007) in April 1999. DB also owns Class 58s that are currently stored in France, but they have not been included in this survey, which focuses on the UK fleets.

In mid January, six Class 66s were stored, and two of them will not run again. They are 66048 and 66734, both of which were involved in accidents in Scotland.

66048 has been out of traffic the longest. It was stored in March 2010, two months after incurring damage in a derailment at Carrbridge. GBRf 66734, meanwhile, fell down an embankment after hitting a landslide at Loch Treig in June 2012. Seven months later - and it’s still there.

Two DB Class 67s (67011 and 67025) are the only examples of their class stored. Both were removed from traffic on the same day, although this was for repairs, and it is highly likely that both will be back in traffic by the time this edition of RAIL is published, with other ‘67s’ stored in their place while receiving repairs.

Of the nine stored Class 73s, Nemesis Rail’s 73103 has been out of action the longest. Withdrawn by EWS in January 1999, it is currently at RAF Throckmorton, Worcestershire.

July 2002 saw Virgin CrossCountry remove 86231, making it the longest that any of the 16 stored Class 86s has been out of traffic. Europhoenix owns it, so it is likely to be either exported or scrapped. It is allocated to EP’s UK pool, so scrapping appears more likely.

Many of these ‘90s’ are unlikely to work again. DB offered 12 for sale two years ago, although industry insiders suggest that this was more to test the market.

Rumours suggested that rolling stock leasing company Porterbrook was interested in acquiring them, but nothing materialised. There was also interest in saving one of them for preservation, but this also did not happen.

In the market as a whole, it is possible that DB may offer more locomotives for sale or export some of its fleet, while some of the smaller companies may yet offer for sale assets that have no future.

DRS, for example, has recently sold six Class 37/4s for scrap, while HNRC is also culling locomotives with no future. It is likely that in 12 months’ time, a survey of stored locomotives will reveal a figure closer to 300.