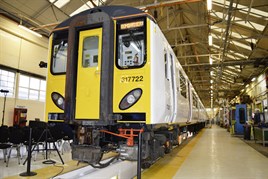 With a lack of money for new trains, it seems, owners of existing rolling stock need to find new ways of extracting the best value from their assets.

New traction packages that improve reliability and transform performance appear to be the way forward. Eversholt Rail’s Class 465 Networkers have already been fitted with equipment from Hitachi, while Porterbrook has announced that its Class 455s are to be fitted with traction equipment from Vossloh.

Angel Trains’ current offering is a Class 317 fitted with a traction package from Bombardier. The four-car electric multiple unit (317722) is capable of improved acceleration, enabling its operator to offer faster journey times, with reduced maintenance requirements as a result of new AC traction motors being fitted (this means that no more brush changes are required, so the time between maintenance overhauls can be significantly increased).

The £7 million project to create a re-engineered Class 317 began in 2012, when nine ‘317/7s’ were sent off-lease by Abellio after it won the Greater Anglia franchise.

The finished pre-series unit is currently going through its final testing, having been running at Bombardier’s Derby Litchurch Lane site. For now it will remain based at GA’s Ilford depot, where a lot of the refurbishment work was carried out.

Derived in part from the Delhi Metro system in India, the replacement traction system (from Bombardier’s plant at Vasteras, Sweden) is expected to provide performance more akin to a new train, with the unit also drawing up to 40% less power.

The move from a DC to an AC power unit also enables the train to make use of regenerative braking, and benefit from faster acceleration. According to Angel, retaining DC power requires more maintenance and doesn’t regenerate power (achieved through braking), and so therefore was more expensive than AC traction.

Switchgear, smoothing chokes, control electronics, brake units and thyristors have also been replaced, while batteries and battery chargers have been relocated. Other electrical equipment - such as the pantograph, 25kv cable, main transformer and vacuum circuit breaker - has been retained.

One challenge was fitting new equipment into the existing space. Because the ‘317’ is not new, Bombardier could not start from scratch on fitting some of the underfloor equipment, such as the transformers. Rebuilding was also not a major possibility. As a result, filters and convertors are now ‘open’ (as opposed to being sealed) - in that respect the underframe of 317722 will resemble an Electrostar.

The train retains its 100mph maximum speed. Initial performance suggests reliability will remain within 5% of the existing Class 317s.

Internally, two coaches have been rebuilt with new interiors, while two retain the former Stansted Express interiors with which the ‘317’ was fitted when refurbished in 2000. The only difference is that First Class has been declassified.

In the new-style interiors, there are no bench seats, but Angel says that remains an option. There are wider vestibules, and the luggage racks have been removed.

The complete interior redesign on two vehicles has increased the overall capacity, and ensured PRM-TSI (Persons of Reduced Mobility Technical Specification for Interoperability) compliance, with significant engineering work on the doors to make maintenance work easier.

There is a wider door aperture, not dissimilar to that of South West Trains Class 455s and the Eversholt-refurbished ‘321’, with a view to improving dwell-times on busy metro and suburban services.

Seats are to the same design as those for the Class 377/7 Electrostars currently being built at Derby, but with a different moquette. GA has been particularly keen to ensure that the area underneath seats is easier to clean - the current ‘317’ layout makes this awkward, but the new seating arrangements offer a vast improvement.

The testbed unit features a ‘metro’ layout, but Angel will offer a variety of interiors, including an outer-surburban layout for longer journeys.

A decision has not yet been made on whether to replace the current hopper windows - the current climate control system has been overhauled, but not replaced. (By contrast, Eversholt’s 321448, which has been fitted with new interiors but not yet with a new traction package, does have sealed windows instead of hopper-style windows.)

Internally LED lighting is installed, but no sockets, while charging equipment for phones, laptops and tablet PCs can be fitted if and when a production series is ordered for the rebuilt ‘317s’.

Angel and Bombardier are currently focused on showing how the trains can perform. But they also need to consider what the market wants. If the trains are used on suburban or Metro-style workings, are sockets a necessity over, for example, WiFi?

Regarding energy usage, the ‘317’ will use 40% less electricity than previously.

Testing will be carried out initially on the Colchester to Clacton branch, to be followed by faster testing between Diss and Norwich. These routes have been chosen because they are quieter at night (when the tests will be carried out) than other sections of the Great Eastern network. It is expected that the tests will be completed in February, with the unit entering traffic for a six-month period.

Nine ‘317/7s’ are currently out of use, although 317722 will be used by Greater Anglia, and will initially form part of the ‘317’ fleet working on the West Anglia route.

Angel says there is a lot of operator interest in the project, but would not be drawn on the identity of these operators. (There has been speculation that Northern Rail is keen.) Placing 317722 with GA makes sense at the moment, because that is the operator with the largest ‘317’ fleet.

What makes it an attractive proposition for the industry is that a four-car EMU with new interiors and new (more reliable) traction packages will be half the capital cost of a new EMU to lease. Angel adds that it is happy to provide new or re-engineered trains.

Should an operator want to order a fleet of rebuilt Class 317s, both Angel Trains and Bombardier confirmed that the work would take an impressive 25 days per unit, once the project is up to speed.

There are two different projects involved within the rebuild, with a C4 overhaul taking three days and a C6 overhaul taking 20 days. This means that, potentially, the rebuild of GA’s fleet of 51 Class 317s would take just over a year to complete.

The biggest challenge with the work, according to both companies, is the installation of cabling - this needs to be retained but rehoused, because of the remodelling work inside the ‘317’. Internally the final decision on interiors will rest with the franchisee.

This project could help the industry cut costs, while delivering new train-style interiors and performance. Innovation, it seems, is thriving.