Stop-start ‘66’ put through its paces 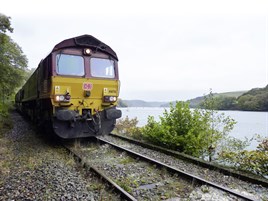 Cornwall’s clay traffic has changed in recent years. Traffic is supposedly in decline - the famous ‘Silver Bullet’ wagons no longer serve the area, and instead run through the Channel Tunnel, and continue to serve Irvine.

But there are still trains running in Cornwall. And DB Schenker will tell you that they are running in a more efficient way.

Rather than a few Type 3 locomotives running along branches with small trains of eight or nine wagons, today there is one Type 5 (Class 66) hauling 38 CDA wagons on trains. It may not be as interesting for the observer, but it is efficient and delivers what the customer (Imerys) wants.

The trains run to Fowey Docks, from where the material is exported. On Mondays, Wednesdays and Fridays the ‘66’ hauls the train from Goonbarrow, while on Tuesdays and Thursdays it runs from Parkandillack.  There are also stores at Trevisco that the trains serve.

These are relatively short distances as the crow flies, but the trains predominantly run over branch lines, and so are slower.

Until 1988, the trains used the famous ‘clay hoods’ that were synonymous with the once-extensive clay train operations in the Royal Duchy. The vacuum-braked OOV wagons had been built in the late 1950s, but owed much of their origin to an earlier Great Western Railway design. They carried 13 tonnes.

The OOVs transported hundreds of thousands of tonnes of clay, with 40% of the Fowey shipment traffic received by rail - equating to more than 700,000 tonnes in the 12 months ending September 30 1987 (their last full year of operation).

In total, 124 CDAs were built. They are air-braked, and have a payload of 32 tonnes. They were closely based on the successful HAA merry-go-round hoppers, but fitted with a hood so that the cargo could be kept dry in transit. There were initial problems with clay sticking to the internal wagon sides during discharge, but this was rectified by the application of a coat of anti-stick compound.

The first revenue-earning train of CDAs ran on January 26 1988, and by February 11 the changeover from the ‘clay hoods’ to the new wagons was complete. The very last ‘clay hood’ train was the 1528 Lostwithiel-Carne Point on February 10, hauled by 37672.

Today, two rakes of CDAs are in use, with three stored at St Blazey. They are reportedly due for scrapping, although there are other parts of the DB business interested in them.

DB Schenker Customer Services Supervisor Daryl Hutchinson is based at St Blazey, and his role is to resource the flows and make sure all is well with the customer. At the once intensively used depot, he explains to RAIL how things work now. Unusually there is a spare Class 66 at the depot, which these days is not usually the case.

“It’s amazing how long the trains can take,” he says. “Sometimes they can be running ‘round the corner’, but they take a while to shunt.”

He says there are nine drivers and four ground staff based at the depot, plus two more staff who cover any shortfall. The staff cover routes to Westbury and Southampton, and Hutchinson explains: “They will also take the Cliffe Vale train to Exeter. Occasionally there is ballast work, but there is not much scope for much more.”