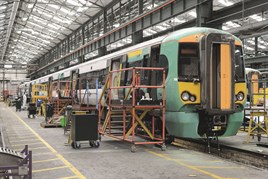 All Southern had to do was increase the number of seats it provides at peak time by a few thousand, while at the same time carrying out overhauls and refurbishment on its fleet of Electrostars, and introducing a new timetable. Simple.

Of course, it’s a lot harder than that. Southern is one of the UK’s busiest train operating companies, and is relied upon to provide thousands of seats on hundreds of trains each day to take commuters in and out of London.

Its fleet includes 182 Class 377 Electrostars dating from 2002, and which require both overhaul and refurbishment. This work was being carried out at Selhurst, but was being done separately, meaning two units would have been out of traffic at the same time.

Stood side by side in the repair shed, two ‘377s’ would offer 231 seats each (if they are ‘377/4s’). By not having them in traffic, Southern was technically short of at least 462 seats, although in reality many more because of the number of trains each ‘377’ is rostered to work each day.

The challenge for the maintenance team was to reduce the number of trains out of traffic by 20%, while still refurbishing one ‘377’ per week. Southern also wanted to improve its national passenger satisfaction levels and reliability.

Those in charge recognised that working day and night would not be enough to meet this challenge, and so the Fleet Service Team at Southern embraced a philosophy made famous by Toyota, called ‘Lean’.

Since mid 2011, staff have been attending residential week-long workshops in Doncaster. When they returned to their respective depots, they began implementing what was taught in Yorkshire.

‘Lean’ teaches staff to have a voice, and encourages coaching rather than ‘management’, says Southern. It also encourages ownership of the trains - rather than being sent away, all now visit Selhurst for overhauls and refurbishment.

‘Lean’ is a process improvement philosophy that is widespread in manufacturing but less well known in the rail industry. There will be four ‘Lean Champions’, while other staff are split into three different levels, depending on their training.

‘Lean’ enables every engineer at Southern to have a voice - their views are listened to, so as to improve the overhaul process. Not every idea is implemented, but they are logged so that the way the trains are maintained can be constantly reviewed and methods improved.

In its entry for the Maintenance Team of the Year category at RAIL’s National Rail Awards, Southern said: “Empowering our engineers and embracing ‘Lean’ is proving a potent combination. Our ‘377’ team reduced exam downtime from 80-90 hours to 40 hours, our ‘171’ team achieved the best reliability of any fleet in the UK, and the team refurbishing our ‘377’ trains are doing so at a blistering rate of one four-car unit per week, entirely in-house.” This was achieved through breaking down processes into component parts, focusing on actions that added value and removing anything that didn’t.

Even the older fleets are doing well, with its Class 442, 455 and 456s outstripping the TOC average for mid-life fleets. The average is just over 10,000mpc, while the best performers for Southern, the ‘456s’, are recording almost 25,000mpc.

With 182 trains to be refurbished in a £9 million project that will take another 21⁄2 years, Southern is grateful that its Fleet Service Team is “not your average maintenance team”. It says the team meets challenge not with complaints or trepidation, but with an entrepreneurial spirit.

The work to refurbish the Class 377s could not be deferred. Normally it would be outsourced because of the size of the project, but this would leave the ‘377s’ out of traffic for too long, and they are desperately needed. Instead, the team split into two shifts, and now works day and night to complete a unit. The work involves more than just a refresh. It also includes removing graffiti, and carrying out additional repairs while the ‘377’ is stopped.

This is the biggest in-house rolling stock train refurbishment project in Southern’s history. And it works - availability of the ‘377s’ has risen from 93.5% to 95% since the December timetable change. Meanwhile, Southern’s EQiIP team measures and attempts to improve service quality, including many aspects that the maintenance team is tackling, such as the interiors and toilet availability. This has risen from 92% to 96%.

Justin Lanigan is the overhaul improvement manager at Selhurst. He moved to the South London depot a year ago from Brighton, and admits that the size of the work is an eye opener. But it’s a task he is relishing and has grabbed with both hands.

“Southern wants continual improvement and staff go to Doncaster to learn the process,” he says.

Before the new timetable was introduced, there used to be 15 of the ‘377s’ stopped at any one time, including those at other depots. This was identified as a problem, so the number stopped was cut to 12. Even that would be a stretch on resources, but that is the level Southern has reached. Of the 182 Class 377s it has in its fleet, 170 are needed each weekday, and they are now made available.

Ways have been found to increase the work carried out without affecting the number of trains in use. One is better use of the wheel lathe at Selhurst.

“A train would come in and only one coach would have its wheels turned, so it would miss the evening peak,” explains Lanigan. “We changed that to two coaches.” It is now available for the evening peak.

Better planning for when trains arrive at the depot also helps. If one needs repairs, or is to be refurbished, it is positioned in the formation so that it can be easily shunted into position, saving time and effort.

If a 12-car formation featuring three ‘377s’ arrives in the depot yard, and the ‘377’ that needs attention during the day is in the middle, that will delay the process, and could result in only 169 trains being available instead of 170. This could have a knock on effect on National Passenger Survey customer satisfaction scores, because trains will potentially be short-formed as a result.

Lanigan also explains how the refurbishment and overhaul has been combined through ‘Lean’. The ‘377s’ were planned to go through a full overhaul and a refresh separately, but this was combined to speed up the process and ensure there were enough in traffic.

And the time taken, even with the work combined, has been reduced. Previously a ‘377’ took seven days to complete, now it is five. This also provides more time for other unplanned work such as defect repairs.

The ‘377’ arrives at Selhurst on a Saturday, work starts on the Monday, and it is released in time for the following Monday’s morning peak.

The only components that are sent away are bogies. They are dismantled and the frames sent away, while the rest of the component is overhauled at the depot.

The Electrostars also receive work at Brighton and Selhurst Inspection Shed. Running repairs would be carried out every six or seven months, along with major exams. A train would be stopped for four days, but this has been improved to 48 hours.

Bombardier, which built the trains at Derby, used to be heavily involved in maintenance, but now it is contracted to provide only major components. The rest of the work is carried out predominantly in-house.

Says Lanigan: “We have always been pretty good with maintenance, but taking it in-house has helped.”

Next in line for the work are the Class 171s maintained at Selhurst’s Inspection Shed, the newest of the buildings at the depot.

Southern is currently looking at the overhaul process for the diesel multiple units. They have been treated before, so this work will be a combined C4/C6 overhaul, which means interior, exterior and mechanical work will be carried out. This will be done at Selhurst’s Repair Shop, where the ‘377s’ are being worked on.

The family resemblance between the ‘171s’ and ‘377s’ will help with competency - while there are obvious differences between DMUs and EMUs, some components are similar.

It is planned that two vehicles will be completed in five days. This means each member of the two-car 1717xx fleet should be completed within a week, while the six four-car 1718xxs will take a fortnight, although Southern is looking at ways of reducing that.

And ‘Lean’ will be implemented, with staff not used to working with the DMUs involved in the ‘Lean’ process. Lanigan says a fresh pair of eyes helps because they may see things that staff familiar with the trains may not.

Southern also believes it is best practice for staff from other depots to be as involved as possible on all fleets. Brighton staff visit Selhurst regularly, and provide a different view by asking questions that perhaps challenge the way things have been done before.

Southern has been a constant success story at the NRAs, winning awards year in, year out. This is the second time in five years that its maintenance team has walked away with a major award. Visiting Selhurst and meeting the teams involved, it is easy to see why.