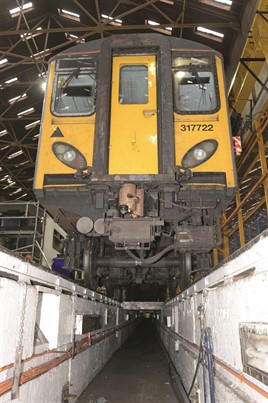 We are repeatedly told that this is a time for austerity. Even so, the reality must be faced sooner rather than later - Britain’s railways need new trains.

Many of the units in traffic are approaching 30 years old. Yet the next tranche of electrification is likely to merely trigger cascades of existing vehicles (rather than what happened post-privatisation, when hundreds of new electric multiple units were ordered to replace trains that were between 30 and 40 years old).

New EMUs will be needed on what will be newly electrified lines from London Paddington and in the North West, while the Welsh Valleys could also be wired.

And the trains currently in use will need to be modified, to prepare for the Disability Discrimination Act (DDA) that states all trains must be compliant by 2020.

Nor are there huge reserves of cash to order new trains, to replace the hundreds of vehicles that can be considered mid-life (typically, the second generation of EMUs and DMUs built between the late 1970s and late 1980s, most using the Mk 3 bodyshell as the basis of the design).

They are the workhorses of the railway. The likes of First Capital Connect, Greater Anglia and Northern Rail cannot do without those powered by overhead line electrification (Classes 313/315/317/319/321/322), while the third-rail equivalents (Classes 313/455/456/507/508) are also invaluable for FCC, Southern, South West Trains and Merseyrail.

The latter is already looking to procure new trains, but the rest will probably have to soldier on with their existing fleets.

Yet these trains are coveted by operators. For example, Northern has hinted many times that it would like ‘317s’. And Angel Trains, which owns most of that fleet, has already told RAIL it is talking to Northern about the trains (RAIL 699).

The next Great Western franchise will include the introduction of cascaded trains (expected to be Class 319s, but still to be officially confirmed). The ‘319s’ will be made available by the introduction of around 1,200 vehicles on the Thameslink route from 2015, while 61 Class 315s could be available from the same time once Crossrail starts using new trains that it is likely to order next year. Industry speculation suggests that the ‘315s’ may end up in South Wales, but that would not be for a few years.

In the meantime, rolling stock companies (ROSCOs) will need to ensure their trains comply with disability requirements before leasing them to operators. In short, they will need investment.

So what can be done? Angel Trains, following a competitive tender, has joined forces with Bombardier on a collaboration that will see a Class 317/7 that is currently off-lease (317722) transformed both mechanically and internally.

A total of £7 million is being spent on fitting a new traction package (£6m) and experimental interior (£1m) that is designed to increase the life of the train by around 20 years.

Work has already started on the four-car EMU, which was last used on February 3, on National Express East Anglia’s 2200 London Liverpool Street-Ipswich with classmates 317708/709.

It is one of nine ‘317/7s’ handed back to Angel by NXEA at the end of its franchise. (Abellio, which took over the Greater Anglia franchise, decided it did not need them.)

The fact that the train was off-lease did not matter - Class 317s had already been identified as a fleet likely to attract a number of operators.

“We have been looking at ‘317s’ for the long-term franchises,” says Angel Trains Chief Operating Officer Kevin Tribley. “The ex-Stansted units being off-lease gave us an opportunity to accelerate our thinking.”

Tribley says the fact that the ‘317/7s’ were without a home allowed Angel to “give us a pre-series vehicle” that would allow the modifications to be demonstrated. “It will prove the benefits of the work,” he says.

As for which operator will use it, he says: “We have been talking to a number of parties. Obviously Greater Anglia is one of them.”

GA is the largest user of the Class 317s, although the fleet’s future is in doubt when the new longer-term franchise begins in 2014.

“We are turning it into a ‘Metro’-style interior,” says Tribley. Two vehicles will have their vestibule draught screen pushed back, seats removed and more standing space created, with the new interiors similar to those fitted to the South West Trains Class 455s.

This is being done to gauge whether passengers prefer that, or the style fitted to the other two vehicles. The vehicles to be modified will be Driving Trailer Standard Open 77021 and Motor Standard Open 62682.

Tribley says the modifications are also important because the company is looking at the wider fleets, and the work will provide valuable feedback, positive or negative. For example, capacity is an issue. “We are unclear where the market is going in terms of seats or standing. If the passengers can see something, they will have an idea of what could happen.”

By producing this pre-series train, does Tribley believe that no new trains will be ordered?

“We would never be so presumptuous regarding no new rolling stock. Some bidders will want that. We are open for that business. That market will determine other fleets.

“What we are hoping to demonstrate is that there is a real viable alternative that can provide significant cost benefit. It will be about performance, being environmentally friendly, and reliability.”

Angel has also sought the views of Passenger Focus. “We walked it through the plans and metro layouts, and they made valid comments,” says Tribley. “We are giving bidders for franchises the option of whether they want this, but we are not pre-determining the layouts. Different bidders will have different ideas. It will also depend on the areas they operate.”

Angel Trains Project Manager Stuart Benford adds: “We are looking at a programme from 2014-2017, when there is refranchising. The primary focus has been GA, but there is also focus on the electrification strategy. We know Northern is interested, and there is a wider opportunity for cascading fleets. We recognise that will be possible after Crossrail, and there will be surplus stock to meet these opportunities.”
The design work is being carried out in Sweden, America and Derby.

Benford says Bombardier is a good choice as a partner because of its work with the ‘317s’. “It does the C4 and C6 overhauls at Ilford, and is currently overhauling the existing packages fitted. It was the obvious partner,” he says.

Tribley adds: “This is accelerating plans we had in place. This is an asset manager supporting longevity. This is McNulty and cost saving. It is a win-win situation. This is highlighting to the market what can be done.”

Bombardier’s UK Representative Paul Roberts says the length of the project was determined by the engineering, and that work has started on the design phase.

“This has been in our strategic plans for two years,” he tells RAIL. “We could see with the refranchising coming up that the viability of new trains and system upgrades needed to be looked at. There are two or three options coming up, including the ‘317s’ and other fleets.

“From what we see there will be new orders , but these will be on much higher-density routes. The aim of this is that the lessons we learn will be available going forward. The business case looks good.”

Roberts confirms that 317722 was not chosen simply because it was available.

“On or off-lease wasn’t part of the thinking, as we were close to a deal anyway,” he says. “Strategically a ‘317’ was right to do. The industry will look at this as a trailblazer for the new incumbents of a franchise. We would see this as the first of a number of trains.”

As for the performance of 317722 when it returns to traffic, Bombardier Vehicle Engineering Manager Duncan Ravenscroft says: “The tractive effort of a ‘317’ drops off at 60mph. They struggle to reach 100mph. Fitting new AC motors will allow the train to get to higher speeds. Higher speeds serve reliability, and the reliability of the trains will be a step-change.”

Ravenscroft would not be drawn on what the contract stipulates for the reliability of the ‘317’, but says it is a demanding change.

All the routes the trains could run on have been modelled to see how the train will perform. Meanwhile testing of 317722 will begin in September next year. It will go to Derby Litchurch Lane for initial testing on the test track there, before returning to Ilford for main line testing, probably in October.

Ilford was chosen because of its affinity with the trains. They have been based at Ilford ever since they were delivered in the early 1980s they have received C4 overhauls there, and for the past 15 years C6 overhauls have been carried out there. And critically, according to Ravenscroft, the depot is located adjacent to the Great Eastern Main Line, which means the ‘317’ can be tested there.

A driver training programme will be implemented, because although the actual controls will remain the same, the train will perform differently to a conventional ‘317’. It will also need route acceptance - although not a new unit, there are enough significant changes for the train to require a new safety case. This will be achieved through the testing process.

Says Roberts: “We wouldn’t say this is a new unit, but it will be a modern vehicle. It will have four traction motors rather than six, which means it will not be able to perform like an Electrostar.”

And the significance of this project isn’t lost on Ravenscroft. “This could add another 20 years on the train. It will be fit for a longer franchise.”