Saluting the success of S-Stock S7s and S8s 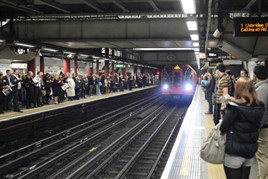 Travel on the London Underground today, and there is a good chance you will be on a Bombardier-built train.

While the Victoria Line trains date from 2009, by far the largest fleet is the S-Stock. And when it comes to metro trains, they are a game-changer.

First introduced on the Metropolitan Line in 2010, the S-Stock trains (built in Derby at Litchurch Lane) are the first Underground fleet fitted with air-cooling systems. They initially replaced trains dating from 1960, and are now beginning to appear on the District Line, the last of the lines where they will be introduced.

“There is a review every Friday for performance. The Metropolitan Line fleet is recording 75,000 kilometres between failures. We also had a very good Christmas period.”

The manufacturer says there is a performance target written into the supply contract, although it will not disclose it for client confidentiality reasons. It does, however, tell RAIL that it is beating the target, and hints that it is around twice where it should be.

Following their introduction on the ‘Met Line’ the new trains were subsequently rolled out on the Hammersmith & City (H&C) and Circle Lines. In total they operate on 40% of the London Underground network.

The deal placed by Transport for London was staggering. It wanted 191 trains consisting of 1,395 vehicles, and it is said to be the biggest ever train order placed in the UK.

The trains are either seven-car or eight-car units. They have differing interiors depending upon the routes that they serve.

The design is part of Bombardier’s Movia family, a metro product that has been customised and delivered by Bombardier worldwide, from Singapore to Stockholm.

There are 133 S7 trains and 58 S8 trains for the London Underground project. The ‘S’ stands for Sub-Surface Lines (SSL), while the number dictates how many vehicles they have. The latter (S8) were introduced first, and feature bays of four seats as well as longitudinal seats as they work on the long-distance Metropolitan Line services. All 133 S7s feature longitudinal seats. Cantilevered seating is fitted on all trains, which makes cleaning easier and storage of bags much more simple.

The entire S8 fleet was in traffic by September 2012, allowing the withdrawal of the ageing A-Stock that dated from 1960.

While the S-Stock has a faster acceleration than the older stock it has replaced, its overall top speed is slower, by 8mph. However, this is still faster than the C-Stock and D-Stock it has replaced on the H&C Line and is replacing on the District Line.

Better performance from the trains will also be possible when the voltage on LU is increased from 630V to 750V. This will allow for the increased power demands of the new trains, which feature air-cooling and fully-motored axles. The S-Stock has regenerative braking, meaning it can return energy to the LU network, with around 20% of energy used pumped back into the network.

They also have through gangways, as per the Bombardier-built Class 378s operating on the popular London Overground. This enables passengers to move from vehicle to vehicle more easily, which in turn improves service quality - as passengers can board and alight quicker, so they can move around the train, and therefore dwell times are reduced.

CCTV is also fitted to the trains, and drivers have a track-to-train video link enabling them to be able to see the train exterior before they leave a station.

Doolin explains: “Looking at the feedback, passengers love the air-conditioning and the wide open gangways. The S-Stock is a stunning success.

“We had Russian visitors come to look at the system. We showed them the trains and they could not believe how open they were.”

He notes that this openness means passengers tend to respect each other and the trains more.  There is less chance of trains being noisy, or attracting graffiti, while the openness also brings a sense of security for travelling passengers.